My Experience at the MIT App Inventor Summit 2016

My name is Chinmayi Ramasubramanian. I am 10 years old and got a chance to participate in the MIT App Inventor Summit in Cambridge, MA.

By Chinmayi Ramasubramanian, a 10-year-old girl who was a speaker at WE India 2016 (now called WE Local Pune) in April.

I got a chance to participate in the MIT App Inventor Summit this year at the MIT Media Lab in Cambridge, MA, USA. I had submitted a poster regarding my app, called PlugTheDrip. My poster was selected and hence I was invited to present my poster and my app. It was a privilege to get an invitation from across the globe from Cambridge to Bangalore, India where I live.

About myself and my app

I am studying in Grade 5 in Sri Kumarans Children’s Home in Bangalore, India. During the summer vacation of Class 4, I started developing the PlugTheDrip app, a product that helps to prevent loss of water along with a PlugTheDrip device. The main users are plumbers, homeowners and facility supervisors in offices.

Plumbers can register their name, address and phone numbers on the app for homeowners and facility supervisors to contact them for doing any repairs.

Homeowners can fit the PlugTheDrip device to the taps in their house. Each tap is detected by Bluetooth on the mobile app. Homeowners can add the taps that they want to monitor to the app using Bluetooth ID. If the tap leaks, a notification is sent to the app and an SMS message is sent to the homeowner. On seeing this notification, the homeowner can go through the list of registered plumbers. He or she can see the plumber’s location on Google Maps. He or she can either call or send a message to the plumber who is nearby. If the tap is left open, a notification tells the homeowner of this situation. The homeowner can take necessary action by closing the tap or asking someone else to close it.

The same applies to facility supervisors but they will have to manage taps in office buildings. Offices have more taps than homes, and there is more chance of a leak going unnoticed. Fitting these devices on taps at an office will enable facility supervisors to monitor all the taps on different floors.

Experience at the Summit 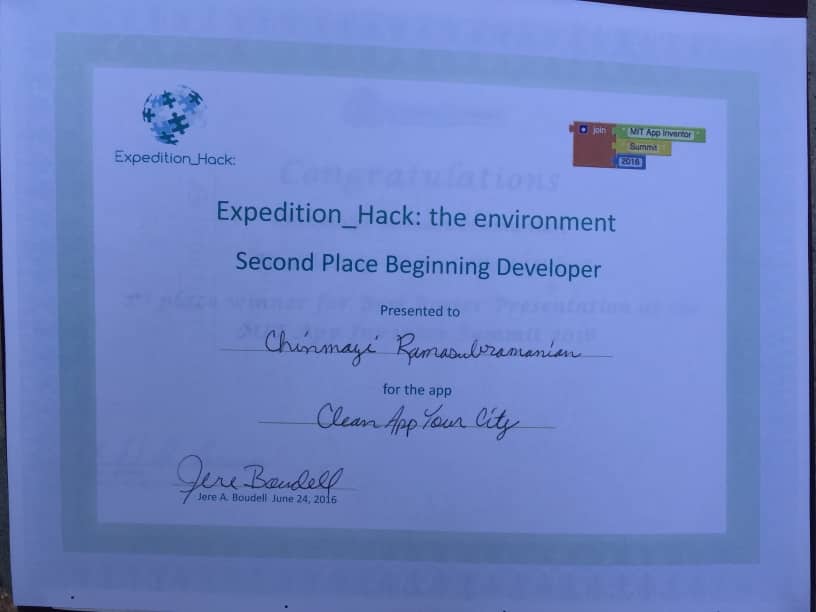 We arrived on the 22nd of June at the location of the summit, which was MIT Media Lab. There was an inspiring introductory talk by Mr. Hal Abelson who was the Director of MIT App Inventor. This was followed by a Hackathon. I participated in the Hackathon in which I developed an app called “CleanAppYourCity”. This was my ever first hackathon and I got into many issues. But after one and half days of work, I was ready with the app. The Hackathon taught me important lessons knowing how to manage time and testing. I also made a pitch about my app. It won the second prize in the “Beginning Developer” category.

There were many interesting workshops at the summit. One of the workshop was to use the new App Inventor component called Bluetooth Low Energy or BLE. In this workshop, I made an app to talk to a microcontroller called Adafruit Feather which in turn measured the number of times a patient opens or closes a pill bottle. This type of app can be used to monitor whether a patient takes pills regularly.

Another workshop I attended was regarding controlling Lego EV3 robots using the accelerometer sensor and a EV3GyroSensor. This workshop was very good and fun trying 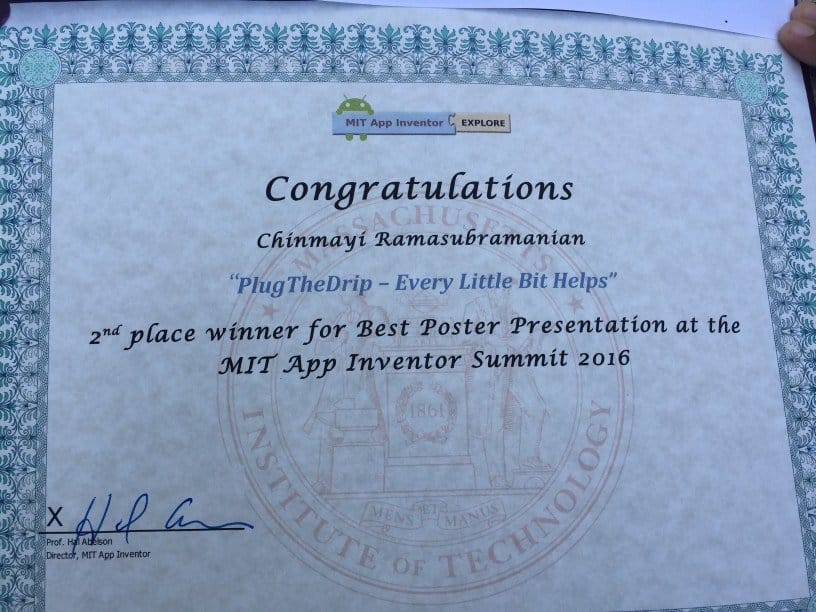 to work with robots.

On the last day of the summit was the poster presentation, which was the event that had brought me to MIT. There were many people of different age groups presenting their posters and apps. The apps were very creative and very useful. There were presentations from people in HongKong, Taiwan, USA and other parts of the world. I gave a 3 minute speech about my poster and app. I also had to do one on one sessions with attendees at my poster booth. Here, we had to explain the apps in such a way that the people who come to see my session like my app and vote for it. I had good interaction in terms of explaining and answering questions of the attendees.

My happiest moment of the summit was when I got a second prize for the poster presentation. I was glad that it was selected from among so many participants. 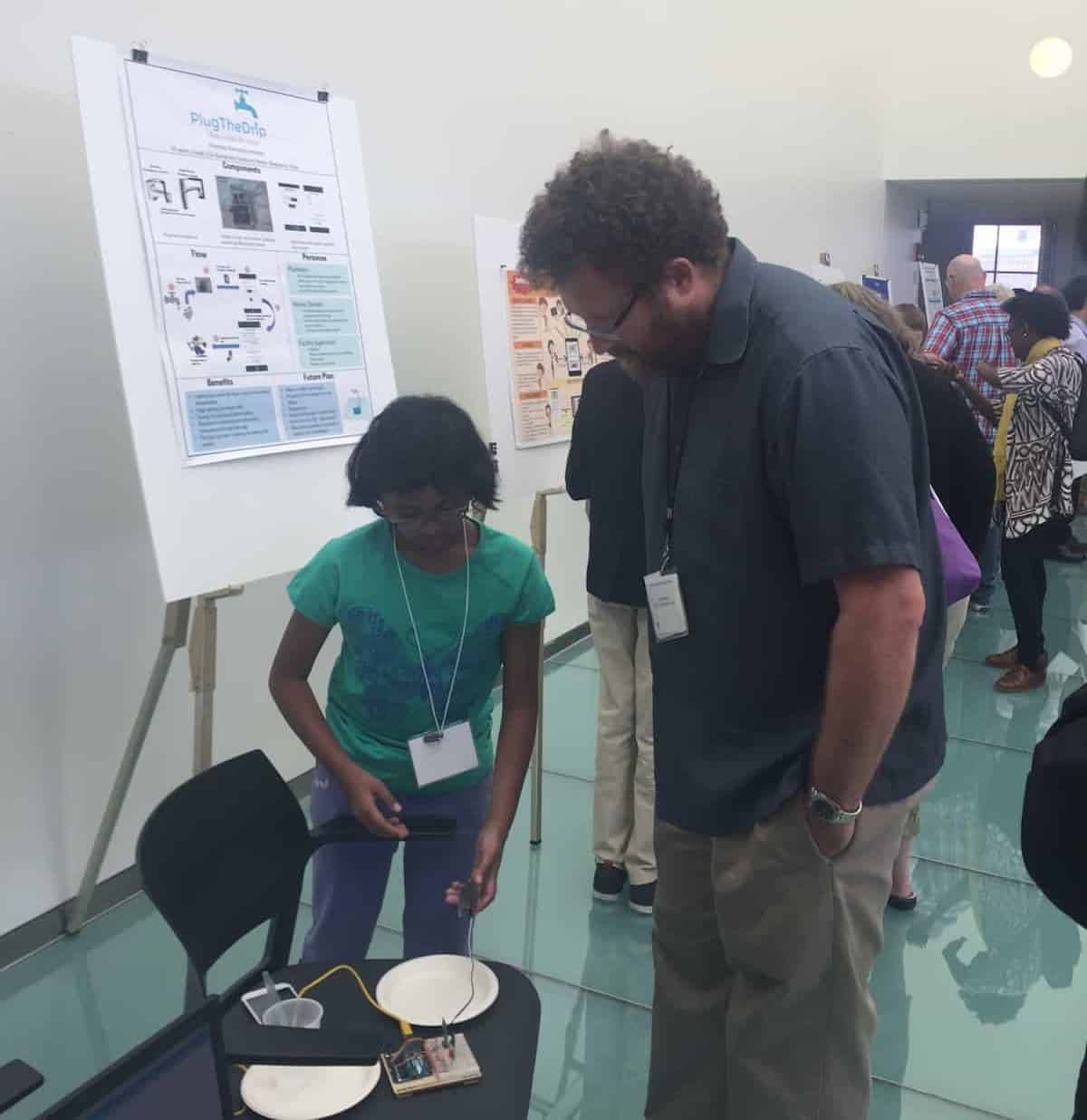 At the poster session, I met Ms. Joy Buolamwini, who was heading the MIT Center of Civic Media. She interviewed me about my previous app, CalamityRelief. She also took me on a tour of the research projects done in MIT Media Lab. I saw interesting projects and labs like Digital Brush, Lego Cities, Vehicle of Future, Movement Replicator, Artificial Intelligence and MIT Scratch. This was very inspiring to see and learn.

I would like to thank the MIT App Inventor team for inviting me to this wonderful summit and also helping me with all the logistics. I am thankful to SWE for providing me travel assistance for attending the summit.

Editor’s note: Chinmayi also developed an Android App for Chennai Relief work which won her an “Inventor” badge on the App Inventor website. She has been using MIT- Scratch and MIT-App Inventor to develop games and mobile apps for years. She says her goal is to develop software to help people.