SWE Founders Day: Letters from the Past

In honor of the Society of Women Engineers' Founders Day, read letters circa 1919 from deans and professors explaining why women cannot be admitted into engineering schools.

In honor of the Society of Women Engineers (SWE) Founders Day, May 27, 1950, we bring you a story from the SWE archives that demonstrates the challenges women in engineering have overcome in education. Troy Eller English has been SWE’s archivist for nine years. One of her favorite stories in the archives comes from 1919 when two University of Colorado engineering students conducted a survey of U.S. colleges of engineering asking if any female students had been enrolled in the past or present.

Those Colorado students, Lou Alta Melton and Hilda Counts, were trying to start the American Society of Women Engineers and Architects (ASWEA), a precursor to SWE, and they were looking for potential members. To conduct their survey, they sent letters to every engineering and architecture department they could find, asking for information about any women who had taken courses. 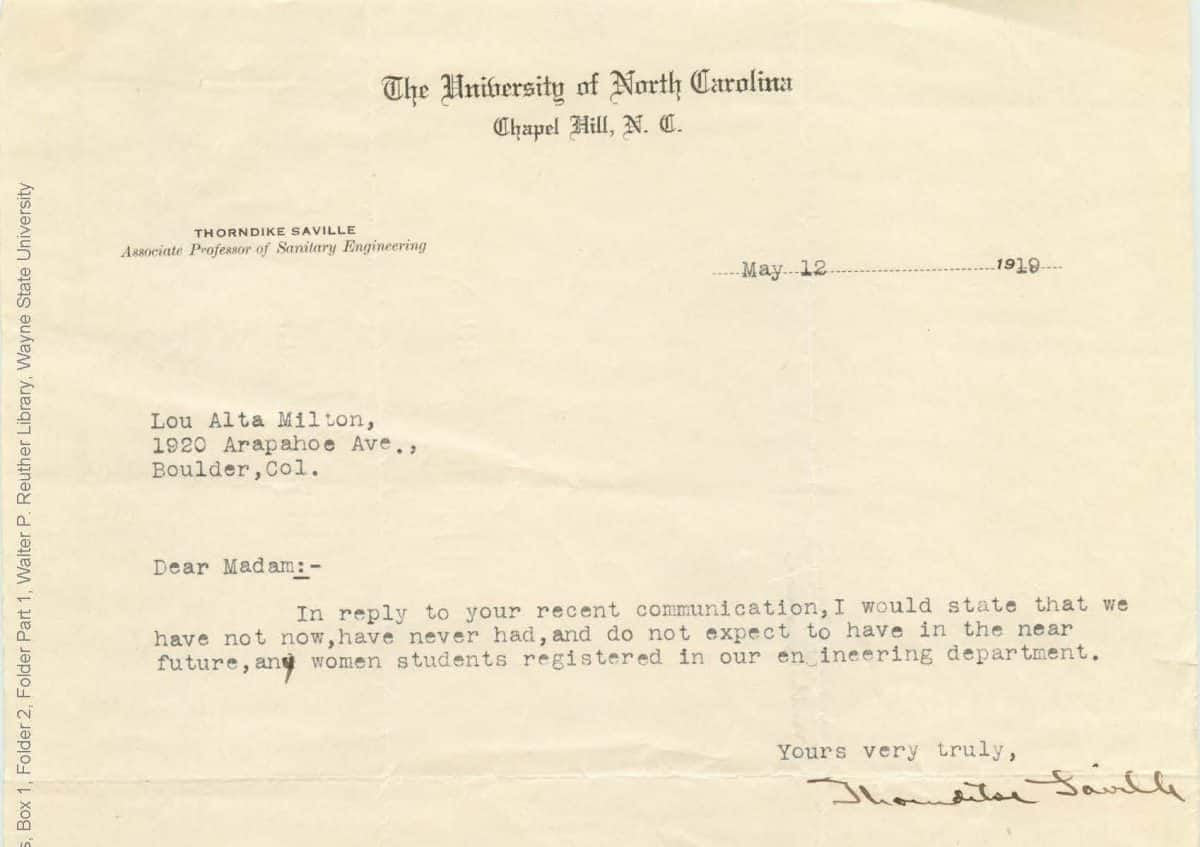 SWE’s archives contain some remarkable letters from deans and professors replying to the survey. To give these letters some historical context, in 1919, most American engineering societies did not accept women as full members, and women were not admitted into many colleges. These letters were written just after World War I ended, and as the 19th Amendment to the U.S. Constitution, which gave women the right to vote, was being ratified. The 19th Amendment passed the House and Senate in 1919. Tennessee was the last state of 36 needed to approve it, and that didn’t happen until August 18, 1920.

Letters from the SWE Archives

Some letters in response to the survey cited the law and school policy against admitting women to engineering schools. Click on the sender’s name to see and read the actual letter.

“We do not permit women to register in the Engineering School under our present regulations.”

“Under our State system of higher education, women are not admissible to the University of Florida, nor men to the Florida State College for Women at Tallahassee. While the State College at Tallahassee does not have any engineering departments, it does offer courses in applied science.”

Some of those who replied expressed doubt in the ability for Melton and Counts to find enough women who were interested in engineering to form a society.

“You ask for information or suggestions. I have only this say, that I suspect the number of women who have undertaken general engineering courses is so few that you will hardly be able to form an organization. However, I may be mistaken.

“In reply to your recent communication, I would state that we have not now, have never had, and do not expect to have in the near future, any women students registered in our engineering department.”

Some noted that times were changing.

“Up to the present, women students have not been admitted to GA Tech. Yesterday, the City of Atlanta conferred suffrage on women in City Affairs, so no knowing what may happen!”

“Replying to your letter of May 2, beg to say we have never had, in the University of Arkansas, a woman to register for a serious course in Engineering… I am aware that in the Northern and Eastern Colleges often girls register for Engineering work and make very excellent students.”

One of the most hopeful letters sent to Melton and Counts came from a student at the University of Michigan who explained that the women engineering students there had formed their own organization called T-Square Society.

“The women students in Engineering and Architecture at the University of Michigan are pleased to hear from women studying the same things in Colorado. In 1914 we ascertained that there was then no society organized for women students in engineering and architecture, and at the time formed a society with the approval of the University authorities. The T-Square Society started with 14 charter members, one alumna resident member, and two honorary members.”

A member of T-Square, Hazel Quick, worked with Melton and Counts to create society bylaws, membership application forms, and a logo for their new organization, but ASWEA never took off. Thirty years later, Counts became a founding member of the Society of Women Engineers, and Quick joined the SWE Detroit section in 1952.

A professor from Stanford also had a progressive outlook on admitting women into engineering societies.

“Now as regards the formation of a separate engineering organization which you contemplate, I must confess that I am not in favor of such a move if you can get the young men in your institution to take the proper step which, in my opinion, consists in admitting you to full membership in the existing organization. For years, I have favored the admission of women to membership in the American Society of Civil Engineers, and can see no reason why there should be any discrimination on account of sex.”

Charles David Marx, Professor of civil engineering, Stanford University, and past president of the American Society of Civil Engineers

SWE’s archives contain the results of the survey, which identified 139 women from 23 institutions who had taken college courses in engineering or architecture.

Read more about the SWE archives in SWE Magazine’s article, “The Archives and the Archivist: Sharing SWE’s Story Together.” Below is an excerpt.

The SWE archives, which, since 1993, have been housed in the Walter P. Reuther Library at Wayne State University in Detroit, are hard to fathom. In terms of their sheer physicality, the archives represent a substantial body of materials that occupies 270 linear feet of shelf space — which Eller English says translates rather nicely into the contents of 270 banker’s storage boxes.

Find more information about SWE’s past on our history page.