Skip to content
TRENDING
Webinar: Effective Communication Across the Generations 9 months ago
Get Down with D&I 7 months ago
7 Ways Engineers Can Improve Their Writing Skills 6 months ago
Register Now for Summer Leadership Training Webinars! 6 months ago
Life & Work: The ABCs of Gen Z 2 months ago
Next
Prev
Facebook-f Twitter Linkedin-in Youtube Soundcloud Instagram Flickr

SWE Advocates for Increase in Title IV, Part A Funding

After a brief August recess, federally elected officials have returned to Washington, DC to take up the debt limit, debate the FY18 federal budget, and address other urgent matters. Since returning, the Senate subcommittee passed its FY18 allocation budget and the House version is being debated on the floor.

SWE continues to closely watch for line-items pertaining to STEM education, Title IV implementation, and other areas of concern for women in engineering and technology. To that end, we’ve provided analysis below on current funding for key portions of Title IV, specifically Part A, and relevant areas concerning adequate funding for education. First, to quickly understand the current status of the FY18 budget, please see below for a chart developed by the STEM Ed Coalition: 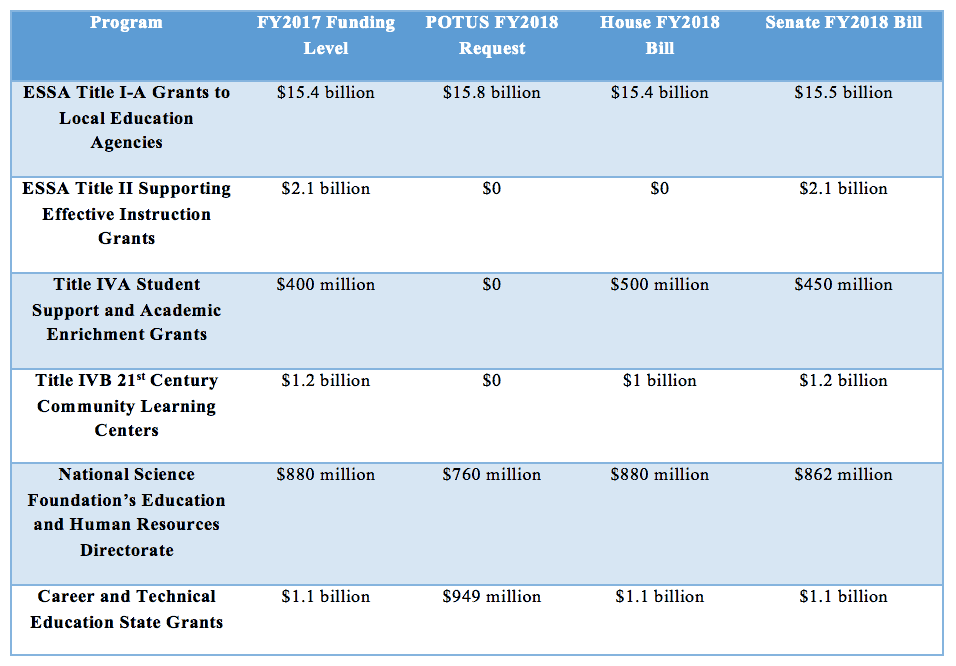 On Thursday, September 7, the Senate Appropriations Committee marked up the FY18 Labor, Health and Human Services, Education and Related Agencies Appropriations bill and passed it favorably. The Senate bill will increases Title IV Part A, which would be increased by $50 million to $450 million (the increased level is still $50 million below the $500 million passed by the House).

On the House side, there was debate and votes on an Omnibus appropriations bill for FY18 that would include eight spending packages, including the FY18 Labor, Health and Human Services and Education Appropriations bill.  Among the proposed amendments are proposals to restore funding for Title II, Part A of ESSA, increase funding for Title IV, Part A of ESSA, and other suggestions for more funding for K-12 and higher education programs.  The House is seeking to pass full versions of all FY18 appropriation bills to ensure the Senate acts or to pave the way for a continuing budget resolution (where spending is approved at the previously FY level until new budget bills are passed).

SWE Advocates for an Increase in Title IV, Part A Spending and for Full Funding of ESSA

Last week, SWE signed-on to two letters of support for bi-partisan amendments to the House version of the FY18 bill:

What is ESSA and Title IV and Why Does it Matter?

Our rationale for supporting the amendments noted in the letters above is clear: both pieces of legislation further STEM education and bring federal agencies closer to adequate implementation of Title IV.

ESSA: As explained by the International Society for Technology Education,  the Every Student Succeeds Act (ESSA) is a bi-partisan effort that includes a flexible block grant program known as Student Support and Academic Enrichment Grants (SSAEG) under Title IV Part A. Federal investments in education technology ensure schools have technology-proficient educators, well-equipped classrooms, sufficiently supported administrative structures and a curriculum optimized to take advantage of the benefits technology offers to all students. These benefits include closing the opportunity and learning gaps and providing students with essential modern workforce skills.

Without increase funding for the program, Title IV, Part A would remain inadequately funded, likely for the foreseeable future. Adequate funding is necessary to ensure that the program is successfully implemented and renewed in future years. As the FY18 budget continues to be finalized, SWE will provide updates as final versions are passed.