Raytheon, Boeing, and Dell are among six new organizations to join SWE's effort to get more women in tech through relauncher programs. 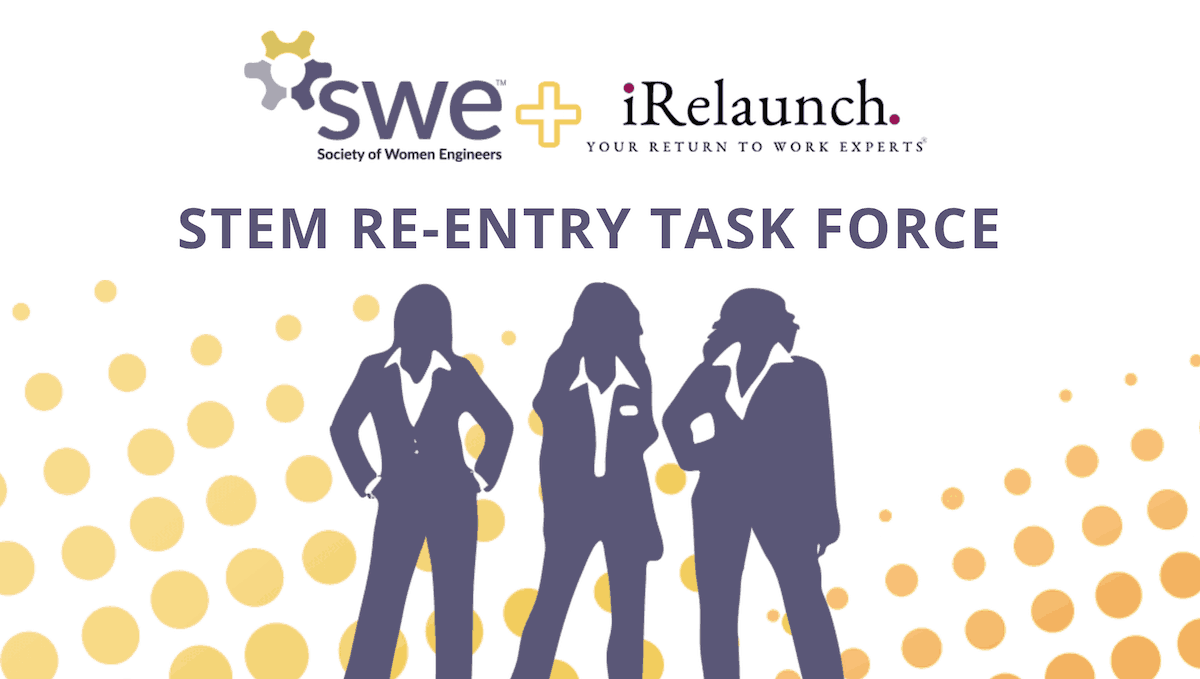 CHICAGO (April 4, 2018) – The Society of Women Engineers announced today the 2018 cohort for the STEM Re-entry Task Force: The Aerospace Company, Asurion, Boeing, Dell, EMD Millipore and Raytheon. These organizations are joining the global movement to hire more women in engineering and IT roles via non-traditional, paid, mid-career reentry internship programs. By joining the Task Force, the organizations commit to pilot an engineering and technology internship program for professionals looking to return to work after a career break of 2-plus years, a nod to working moms looking to get back into the workforce, in addition to men and women returning after career breaks for reasons other than childcare.

“The Task Force meets the needs of women wanting to return to work after a career break while also addressing the challenge encountered by employers in attaining a diverse workforce at all levels of their organizations,” said Karen Horting, CEO and executive director of SWE. “There’s a hidden talent pool in women returning to work after a break, and these programs allow employers to tap into that.”

Some employers perceive hiring candidates with gaps on their resume as a high-risk proposition. They are worried relaunchers are technically obsolete and are concerned about getting them up to speed. Additionally, relaunchers may feel out of touch with the business world, or their interests may have changed or evolved over time. Returning professional internships benefit the employer by allowing them to base their hiring decisions on actual work rather than interviews. For reentry interns, the programs provide professional development experiences, technical and mentoring resources, and a cohort structure for support during the transition.

The roadblock to reentry hits working professionals hard – when they leave their careers to care for children, an elderly family member or other personal reasons, they experience employers’ resistance to hire them when they are ready to return to the workforce. The Center for Talent Innovation’s research shows that while 93 percent of off-ramped women want to resume their careers, only 74 percent manage to get any kind of job at all and just 40 percent successfully return to work full-time. The STEM Re-entry Task Force aims to bridge the gap between these women (and men) and organizations looking for qualified talent.

“On the Task Force, we work with influential, global companies, each of which runs its own unique program,” said Carol Fishman Cohen, founder of career reentry firm, iRelaunch. “Just as these companies run their own entry level university internship programs, they want to run their own reentry mid-career internship programs, so they can determine the key parameters – length, geographic area, timing, size of cohort, functional areas targeted and more that work best for them.”

These new organizations join the STEM Re-entry Task Force as the third cohort of organizations partnering with the Society of Women Engineersand iRelaunch.The founding members include Booz Allen Hamilton, Caterpillar, Cummins, General Motors, IBM, Intel Corporation and Johnson Controls. Over 60 midcareer professionals participated in pilot programs in the first year of the initiative in 2016, with 60 percent to 100 percent getting hired; 89 percent on a weighted average basis. Five of the original seven founding members continued their reentry programs, some doubling or tripling in size. In 2017, seven organizations joined the Task Force as the second cohort, many of them executing internships starting in mid- to late 2017: Ford Motor Company, GE Power, Johnson & Johnson, Medtronic, Northrop Grumman, Schneider Electric and United Technologies. To date, more than 200 returning professionals have participated in Task Force programs.

“Dell is proud to be a member of the STEM Re-entry Task Force! We are thrilled to unite with like-minded companies in creating opportunities for those looking to return to the workforce,” -said Pamela Hennard, Vice President, North America Talent Acquisition at Dell. “Our commitment to inclusiveness at all career levels helps us continue our tradition of forward thinking and differentiates us as a great place to work.”

If you are an employer interested in supporting women in STEM and becoming a future member of the STEM Re-entry Task Force, email reentry@swe.org.

Download the whitepaper, “An Intervention Strategy to Re-engage Women Engineers in the Workplace”to learn more about the value proposition of a reentry program, the unique advantages received through participation in the program, and best practices for implementing the solution in technical organizations, based on the success of the first program.

The Society of Women Engineers (SWE), founded in 1950, is the world’s largest advocate and catalyst for change for women in engineering and technology. The not-for-profit educational and service organization is the driving force that establishes engineering as a highly desirable career aspiration for women. To ensure SWE members reach their full potential as engineers and leaders, the Society offers unique opportunities to network, provides professional development, shapes public policy and provides recognition for the life-changing contributions and achievements of women engineers. As a champion of diversity, SWE empowers women to succeed and advance in their personal and professional lives. For more information about the Society, please visit www.swe.org or call 312.596.5223.

As the pioneering company in the career reentry space, iRelaunch works closely with nearly 40 blue chip companies as they introduce, implement and expand career reentry programs, and leads a national community of over 50,000 “relaunchers” in all stages of career reentry. iRelaunch provides a wealth of resources for professionals returning to work after a career break, ranging from the acclaimed 3,2,1 iRelaunch! podcast to the comprehensive, self-paced Roadmap return to work on-line guidebook. iRelaunch’s 2018 Return to Work Conferences will be held at Stanford (May 1) and Columbia Universities (Oct 4). The Conference is the longest running and largest dedicated career reentry event in the U.S., with over 6,000 people attending 21 Conferences to date.

iRelaunch co-leads the STEM Reentry Task Forcewith the Society of Women Engineers, through which some of the world’s largest companies are piloting reentry internship programs for returning engineers and technical professionals. Universities and professional associations engage with iRelaunch to provide turnkey career reentry programming for alumni and members, through live events, webinars, and online content. For more information about iRelaunch, please go to @iRelaunch on Twitter, visit www.iRelaunch.com, or email info@iRelaunch.com.

Carol Fishman Cohen, CEO and Co-Founder of iRelaunch, consults to some of the world’s largest corporations on career reentry strategy and programming.

Carol wrote the seminal Harvard Business Review article “The 40-Year-Old Intern” about mid-career internships and is a regular HBR contributor. Her TED talk on relaunching careers has been viewed over 1.6 million times and is translated into 29 languages. Carol is the co-author, along with Vivian Steir Rabin, of the career reentry strategy book Back on the Career Track, long referred to as the “Bible of career reentry.” Carol’s return to work at Bain Capital after 11 years out of the full-time workforce is documented in a Harvard Business School case study. Carol was named to the 2017 Thinkers50 Radar list of 30 leading management thinkers and was shortlisted for the 2017 Thinkers50 Distinguished Achievement Awards in the “Talent” category. She received the 2017 “Enterprising Woman Award” from the Women’s Enterprise Development Center and recently received the Society of Women Engineers President’s Award for co-founding the STEM Re-entry Task Force. iRelaunch was a finalist for the 2017 MassTLC Building a Better Workforce Award. Carol is regularly quoted in the national press and is a sought-after international speaker on career reentry topics. A graduate of Pomona College and Harvard Business School, she is a mother of four and lives in Boston, Massachusetts. Twitter: @iRelaunch