Katie Bouman and the Black Hole Heard ‘Round the World

Do what you love, love what you do, and don’t be surprised if your glee is contagious. 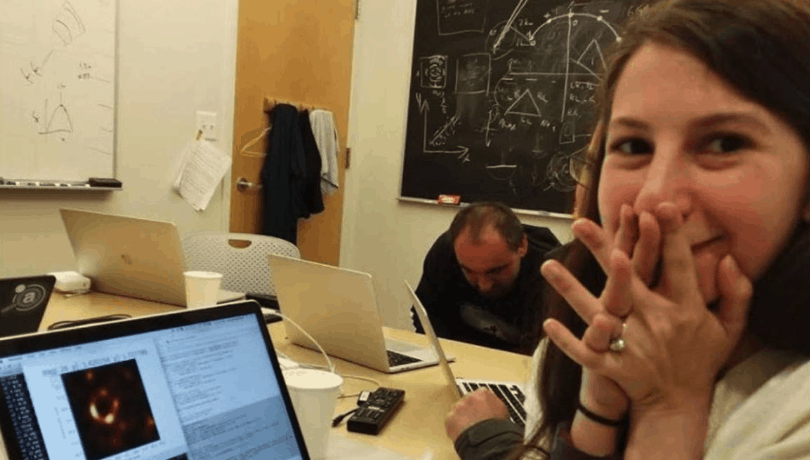 The world has thundered with applause since April 10, 2019, when the Event Horizon Telescope (EHT) project published a first-ever image of a black hole and a Twitter user published a candid photo of EHT research team member Katie Bouman, Ph.D. beaming with delight.

“We love this photo [of Dr. Bouman],” says an EHT collaborator, Sara Issaoun, in an article published by the New York Times, “because she looks so happy. I think her expression really captures how we all felt when we first saw [the image of the black hole].”

This historical achievement reflects the work of a diverse and interdisciplinary global collaborative described by Dr. Bouman in a 2016 TED Talk as “a melting pot of astronomers, physicists, mathematicians and engineers.” Led by an astronomer at the Harvard-Smithsonian Center for Astrophysics (Cambridge, MA), the team included 200 researchers, 40 of them women, representing 60 institutes, 18 countries and six continents.

As a postdoctoral fellow at the Massachusetts Institute of Technology (MIT) (Cambridge, MA), Dr. Bouman contributed to the project’s success through six years of work on mission-critical algorithms used to process massive amounts of data collected by EHT’s strategically-positioned network of eight international radio observatories. More specifically, Bouman developed an algorithm known as Continuous High-Resolution Image Reconstruction using Patch Priors (or CHIRP), but in a Facebook post, Dr. Bouman emphasizes that science is a team sport, saying “No one algorithm or person made this image. It required the amazing talent of a team of scientists from around the globe.”

Dr. Bouman’s joy is an inspiration to people everywhere, especially women working in STEM. A Time magazine article reports that when Bouman thinks about how to engage more young women in STEM-related fields, she thinks it’s important to emphasize that “it’s not just sitting in a lab putting together a circuit or typing on your computer.” The article explains how Dr. Bouman “recalls standing in Mexico two years ago, at one of the sites where telescopes were collecting data on a galaxy 54 million light years away, information she would eventually help transform.” According to Dr. Bouman, “a career in science means working with people around the world. It’s going to telescopes at 15,000 feet. It’s working toward making the first image of a black hole.”

Dr. Bouman will soon become a visiting associate in computing and mathematical sciences in the Division of Engineering and Applied Sciences at the California Institute of Technology (Pasadena, CA). The focus of her research continues to be using emerging computational methods to push the boundaries of interdisciplinary imaging.