Adele Goldstine, the Woman Who Wrote the Book

Goldstine wrote the ENIAC’s technical manual, published in 1946, a monumental achievement considering she created it from scratch the same year ENIAC ushered the world into a new era of digital computing. 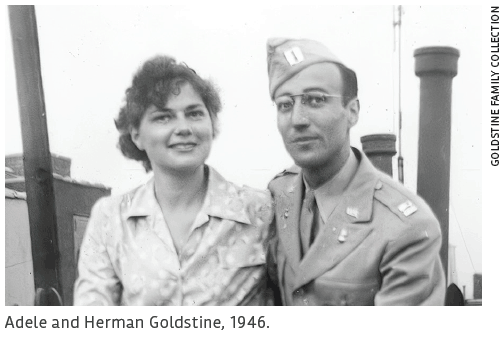 “She radiated warmth,” Madlen Goldstine Simon, associate dean for academic affairs and outreach, University of Maryland School of Architecture, Planning and Preservation, said of her mother, Adele Goldstine. “She was a tremendous teacher, always teaching us math and music. She played the violin well, and taught it to me. There was always music in the house.”

Sophisticated, whip-smart, and full of exuberant energy, Adele Katz Goldstine was more than equal to her many roles — mathematician, teacher, recruiter, programmer, and mother. Born in 1920, she earned a B.S. from Hunter College and an M.S. in mathematics from the University of Michigan by the age of 22, and was working on her Ph.D. when she married and came to the Moore School at the University of Pennsylvania. 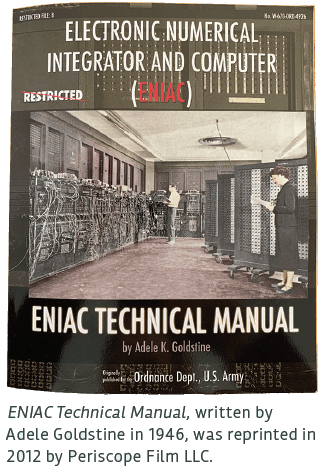 Goldstine wrote the ENIAC’s technical manual, published in 1946, a monumental achievement considering she created it from scratch the same year ENIAC ushered the world into a new era of digital computing.

Later, she would work with professor A.H. Taub, Ph.D., and Jean Bartik at Princeton, performing new calculations on reflection and refraction of shock waves, and with John von Neumann, Ph.D., and Bartik to develop a stored programming system for the ENIAC. Their system provided a 51-order vocabulary, so that ENIAC programmers no longer had to manually plug and unplug cables for each step of the process.

In a separate interview, historian Kathryn Kleiman explained further: “There’s only so much you can put on a machine like that, so Bartik was chosen to hire, train, and lead a team for Dr. Richard Clippinger that changed the way programmers interfaced with ENIAC. During the process, she shuttled back and forth to Princeton, developing the instructions with Adele and von Neumann. Adele was essential to determining what instructions should be on ENIAC.” 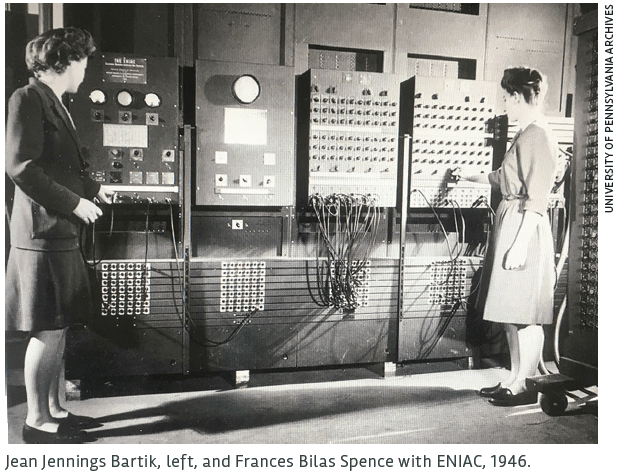 Bartik revered Goldstine, referring to her decades later as one of her “three perfect partners” in terms of logic and program design. And the new system was so successful that the old methods were never used again.

Dr. von Neumann’s daughter, Marina Whitman, Ph.D., professor of business administration and public policy emerita, University of Michigan, recalled that time. “Adele spent quite a bit of time at our Princeton house, working with my father on the project of transforming the ENIAC,” she said. “It was clear that he regarded her as a significant participant in the project. She sometimes carried the infant Mady in her arms, and as I was a high-school girl, gave me my first example of a young woman enthusiastically embracing new motherhood and carrying on with her professional career at the same time. She gave me confidence to do the same when my time came.”

Still, Adele Goldstine has been largely left out of the narrative. “I think there are several reasons she’s little known,” Simon explained. “She died so young, and history tends to be written about those who live. Perhaps another reason is that my mother was younger than my father, who was already fully formed as a mathematician. She may not have been considered a full peer, because she came to teach and recruit and work on the ENIAC for the Moore School and wasn’t able to complete her Ph.D. Third, of course, was the times — and she was a woman in those times.

“She wrote extensively in a journal for us when she became ill, so she could pass her thoughts on to us. She was a city girl, and truly enjoyed having a house with land in the suburbs. I remember her walking among pine trees she planted in Chappaqua, in the striped cotton skirt she often wore, just delighted at how it all came out.”

Simon recalls car trips as a little girl, being grilled by her parents on multiplication and division tables, and always being given books, among them Ernestine Gilbreth Carey’s Cheaper by the Dozen. “Adele was also very interested in design; it was part of our family culture,” said Simon, whose early interest in architecture was nurtured by both parents.

“My parents were in just the right place at the right time to make their contribution,” she added. “It was tremendously exciting for them, being involved in those world-shaking events, keenly aware that a historic moment was calling them. They had wonderful friends they shared with us, with whom they had tremendous bonds, like the von Neumanns, friendships that have lasted generations.”

In one of the notebooks left for her children when she passed in 1964, Adele summarized her work during World War II. Of the ENIAC manual she wrote: “I began to understand the machine and had such masses of facts in my head, I couldn’t bring myself to start writing. But this, too, I finally surmounted. I’m very proud to have finished the job.”

“The job” was 301 pages, 122 figures, and a permanent place in computing history.