Viewed by thousands throughout the month of March, an exhibit developed jointly by the Society of Women Engineers and the National Inventors Hall of Fame served as a model of inspiration for the next generation and a fitting tribute during Women’s History Month. Honoring both historical and contemporary women inventors, the 14-panel exhibit was displayed at the United States Patent and Trademark Office headquarters in Alexandria, Virginia, adjacent to the National Inventors Hall of Fame Museum.

Historical inventors Mária Telkes, Ph.D., and Edith Clarke — pioneering SWE members and SWE Achievement Award recipients in the early days of the Society — were recognized alongside living inventors Barbara Liskov, Ph.D., and Jacqueline Quinn, Ph.D. All four women have been inducted into the National Inventors Hall of Fame and have been recognized by the Society of Women Engineers. Their groundbreaking work significantly influenced their industries. Each woman is rightly considered an innovator, trailblazer, experimenter, pioneer, and role model.

“These women have made tremendous contributions to society and the engineering community, and remain important role models to our future STEM leaders,” said Karen Horting, CAE, SWE executive director and CEO. “To be able to showcase brilliant women such as Dr. Quinn, Dr. Telkes, Clarke, and Dr. Liskov, we are making strides in establishing a positive perception of engineering for young women.”

“We hope these innovation icons will serve as an inspiration to the next generation of students. Our research has shown that exposure to role models positively correlates to a student’s success as an innovator,” National Inventors Hall of Fame CEO Michael J. Oister said. 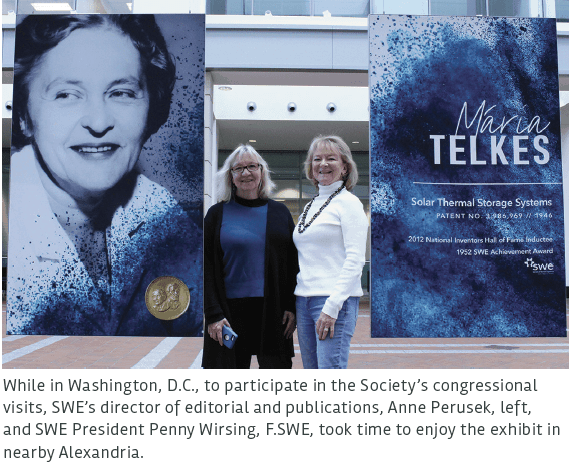 SWE’s first Achievement Award recipient (1952), Mária Telkes, Ph.D., was inducted into the National Inventors Hall of Fame in 2012. Dr. Telkes led an all-female team to design and build the Dover Sun House in 1948 — a home heated exclusively by solar energy. Dr. Telkes’ lifetime of experimentation and research developing solar solutions for stoves, heaters, and materials for the space program earned her the nickname “Sun Queen.”

In 1954, Edith Clarke received SWE’s Achievement Award. She was among the first female electrical engineers to be professionally employed in her field during a time of historic education inequality for women. Her invention, the Graphical Calculator, became a vital contribution to electrical engineers by simplifying equations used to understand transmission lines. Clarke was inducted posthumously into the National Inventors Hall of Fame in 2015.

By focusing on data rather than process, Barbara Liskov, Ph.D., showed how software could be made easier to construct and modify. Her invention is the basis of most modern programming languages. It has greatly impacted software used on personal computers, the internet, and applications, making them easier to operate and maintain. Dr. Liskov received the 1996 Society of Women Engineers Achievement Award, and was inducted into the National Inventors Hall of Fame in 2012.

To address rocket fuel pollution at NASA’s Kennedy Space Center, Jacqueline Quinn, Ph.D., and her team developed Emulsified Zero-Valent Iron (EZVI) — an environmentally safe, cost-effective way to treat groundwater contaminants. Because of its effectiveness, EZVI is one of NASA’s most-licensed technologies. Dr. Quinn received the 2004 Technical Achievement Award from the Society of Women Engineers Space Coast Section, and was inducted into the National Inventors Hall of Fame in 2018.

About the National Inventors Hall of Fame

The National Inventors Hall of Fame (NIHF) is the premier nonprofit organization in America dedicated to recognizing inventors and invention, promoting creativity, and advancing the spirit of innovation and entrepreneurship. Founded in 1973 in partnership with the United States Patent and Trademark Office, NIHF is committed to not only honoring the individuals whose inventions have made the world a better place, but to ensuring American ingenuity continues to thrive in the hands of coming generations through its national, hands-on educational programming and collegiate competitions focused on the exploration of science, technology, engineering, and mathematics. The National Inventors Hall of Fame Museum is a Smithsonian affiliate. Click here for more information. Click here to nominate an inventor for induction.