Skip to content
SWE's Ongoing Work for Intentional Inclusion >
WE20 Has Gone Completely Virtual >
TRENDING
When Reality Ruins Your Plans, You Pivot. 6 days ago
Women’s History Month Through the Scope of SWE 2 days ago
March is Women’s History Month! 5 days ago
Podcast: Louvere Walker-Hannon on Getting More Black Women Involved in STEM 5 days ago
Let Your Intuition Complement the Rational Mind 11 hours ago
Next
Prev
Facebook-f
Twitter
Linkedin-in
Youtube
Soundcloud
Instagram
Flickr

Their perseverance over gender-based barriers inspires young people to strive for their goals.

“I [speak at] high schools and universities and tell students — especially the girls, ‘You can be anybody you want. You don’t have to ask for permission or wait for someone to empower you,’” said Sandra A. Cauffman, acting director of NASA’s Earth Science Division.

Cauffman had no choice but to study industrial engineering at the University of Costa Rica because the school prohibited women from the electrical engineering program. She said she went to her stepfather for help. A U.S. citizen who married her mother when Cauffman was 17, and who studied electronics engineering at a vocational school, he arranged for her to get a visa to study in America.

She received her bachelor’s degree with a double major — physics and electrical engineering — from George Mason University. The process took seven years — three-and-a-half in Costa Rica and another three-and-a-half in the Washington, D.C., suburbs. She spent another six years, including while pregnant and working full time, earning her master’s degree in electrical engineering at George Mason. 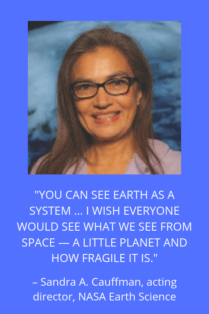 Cauffman attributes her deep desire to learn to her mother, now 80, who endured growing up in an orphanage, being raped as a teenager, and then being beaten and abused by her first husband. The ex-husband also beat Cauffman with a belt and forced her to kneel on rice that he had spread on the floor while he ate dinner.

“My mom always said, ‘Study. Apply yourself. I already made all of the mistakes. Don’t follow my path. You can be somebody different,’” Cauffman said. “She was very open about sex and men. She did it to try to spare us.”

Cauffman’s mother worked as many as three jobs to support the family in the poverty-stricken Hatillo 3 district of San Jose, Costa Rica. Cauffman stayed alone in the house starting at age 7, and she recalls making dinner for her younger brother when she was 9. Cauffman credits her mother with helping her overcome her traumatic childhood, and her tightknit neighborhood for keeping the family safe. “The neighbors made sure that we made it home safely,” she said.

“I wanted to go to the moon someday,” she said. “I found out that the astronauts worked for NASA.”

The dream coincided with her love for math and science.

Cauffman’s hard work paid off when, after graduating from university, she worked in a lab designing optics and circuitry for a NASA contractor to the Goddard Space Flight Center in Greenbelt, Maryland. Three years later, she got her breakthrough when she became a NASA employee.

“I called my mom,” she said. “I was pinching myself. Just working on the Goddard Space Flight Center campus and being at NASA was just awesome.”

When Cauffman was hired by NASA, she said her mom screamed on the phone.

Cauffman has since been awarded the NASA Exceptional Achievement Medal and twice received the Exceptional Leadership Medal, and is a four-time recipient of the NASA Acquisition Improvement Award.

She also had a postage stamp issued in her honor. The official postal service of Costa Rica, Correos de Costa Rica, honored Cauffman as one of three women portrayed in a special set of stamps released March 8, 2017, to commemorate International Women’s Day.

She said she encourages young people to have more than one mentor — one who acts as a sounding board, and another who thinks “totally differently.”

Again, Cauffman credits her mom for her wisdom. “She was always asking, ‘Why do you want to do that? Where is that going to lead? What is the purpose?’ It made me realize that perhaps my initial idea wasn’t a good one.”

Cauffman, who’s been married for 31 years to her college sweetheart and is the mother of 26- and 23-year-old sons, became the first woman and fourth person to receive an honorary membership in the Costa Rica College of Engineers and Architects, along with an apology. She said she’s heartened to see women enrolled and fully engaged in all kinds of engineering studies now.

She continues to be energized by her work observing and understanding Earth as an integrated system from the vantage point of space. “This isn’t just for the United States,” Cauffman said. “You can see Earth as a system … I wish everyone would see what we see from space — a little planet and how fragile it is.”

The greater planetary community is the focus of Lori Glaze, Ph.D., director of NASA’s Planetary Science Division. Dr. Glaze oversees a $2.7 billion budget that will fund a Mars rover mission aimed at Mars’ surface in 2020; a mission to Jupiter’s icy moon, Europa; a mission to an unusual metal asteroid; and a space probe that will tour five Jupiter asteroids that share the planet’s orbit around the sun.

The goal is to understand how the solar system formed and evolved, as well as to figure out where life might exist beyond Earth. 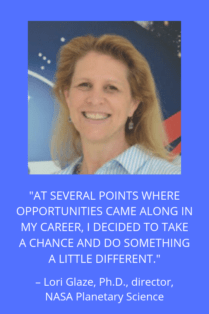 “I believe there is life out there somewhere beyond Earth,” she said. “The challenge is for us to find it.”

While Dr. Glaze would love to be the next Captain Janeway of Star Trek: Voyager fame, she said that “the things we know about physics will have to change” for Janeway-like adventures to happen.

Dr. Glaze loves adventure. In fact, the Arlington, Texas, native tells young people to follow their passions and take advantage of every opportunity. “At several points where opportunities came along in my career, I decided to take a chance and do something a little different,” said Dr. Glaze, whose mother, Jean Ott, was one of four women out of a class of several hundred to major in engineering at The University of Kansas in 1960. Her mother worked on space shuttle wings’ thermal protection for re-entry into the atmosphere. Dr. Glaze’s father, stepfather, and brother are engineers, too.

After she earned her Ph.D. in environmental science from Lancaster University in the U.K., Dr. Glaze was fascinated by volcanoes that exist throughout the solar system. “We can find lava flows and volcanic deposits on the Earth, the moon, Mars, Mercury, Venus, and Io, one of Jupiter’s moons,” she said.

Dr. Glaze’s career began at the Jet Propulsion Laboratory in Pasadena, California, researching a concept for a satellite that could act as an orbiting volcano observatory. Additionally, she worked on cameras, imaging and remote sensing data that fly on NASA aircraft.

She moved on to a private company, Proxemy Research, as vice president and senior research scientist before working at the Goddard Space Flight Center, developing new ideas for space flight missions, including several to Venus.

“All of those experiences came together to give me a broader view of NASA’s planetary community,” Dr. Glaze said.

Nicola (Nicky) Fox, Ph.D., head of NASA’s Heliophysics Science Division in Washington, D.C., works to understand the sun and its interactions with Earth, the solar system, and the interstellar medium, including space weather. The latter is especially important, since space weather can adversely impact today’s technology.

Dr. Fox chose to attend a male-dominated science and engineering college — the Imperial College London — after having gone to an all-girls school. Out of 200 in her class from 1987-1990, about 25 were women. While in the girls school, Dr. Fox said she never experienced gender stereotypes and was encouraged to do what she loved and was good at. 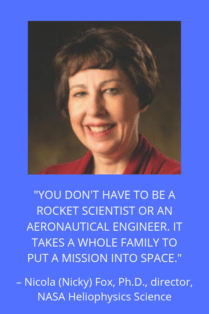 She quickly realized she wanted a career that dealt with analytics and science. Because she passed out during biology dissections, however, she decided her career would never be in the biological sciences.

Dr. Fox found herself in an even more male-dominated environment when she took a one-year master’s course in telecommunications and satellite engineering, where she was one of four women among 220 students.

But the gender imbalance wasn’t her biggest challenge.

“So many of my professors said, ‘Wow, you really think like a scientist, not an engineer.’ Having listened to these comments, my fate was sealed,” Dr. Fox said.

She returned to Imperial College and earned her Ph.D. in space plasma physics.

Dr. Fox loves to mentor young people by helping them find opportunities to shine or to take part in something they can be proud of. She tells them that STEM fields make for an exciting career, and that anyone who loves space and wants to work at NASA can find a role.

“You don’t have to be a rocket scientist or an aeronautical engineer,” Dr. Fox said. “It takes a whole family to put a mission into space.”

She, too, is looking forward to upcoming missions, including two aimed at helping ease the effects of space weather on technology and the Ionospheric Connection Explorer (ICON) mission that will fly through a region of space where space weather interacts with the effects from Earth’s storms, hurricanes, and tornadoes.

But Dr. Fox also appreciates the growing impact of “citizen science” — people who access NASA’s public data on their own.

“They’re looking at it with fresh eyes with no preconceived notions. It’s becoming a very important branch of science.”

Scrapbook: The Universe Was Hers to Conquer