To Inkfinity and Beyond: Finding Confidence in Engineering

SWE Member and Mechanical Engineer, Melanie Wullaert, reminds all engineers and future engineers that it's never too late to start your dream job.

This blog was written by SWE member, structural loads and dynamics engineer and Vibroacoustics/Shock Specialist at BLUE ORIGIN, Melanie Wullaert.

I started engineering school in my early 30s after over a decade of not knowing what I wanted to do with my life. 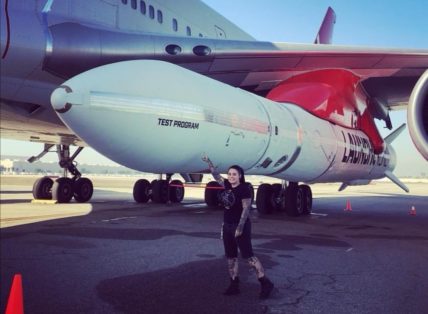 Originally, my goal was to tour with bands. I worked as a stagehand at venues across Germany as a contractor, booked and managed small tours in Europe in my early 20s and progressed to becoming an audio engineer in my late 20s, but never managed to break into the industry enough to make a living. It took me another 5-ish years to find the confidence and strength to start taking pre-engineering night classes at Seattle community colleges, while holding down my nanny day job and working part-time for a local hydrophone company (CetResTec), so I could pay rent and bills and survive.

I was never good at math, physics or any other STEM classes back in school (and by that, I mean I really sucked at it, big time!), so trying to go for a mechanical engineering degree was an absolutely ludicrous idea. Not just in terms of difficulty, but also in terms of finances. I already had no money, so the prospect of spending that much money on a degree I might fail at, was daunting to say the least!

Turns out, I am not as bad at it as I thought! I was accepted into the Mechanical Engineering department at the University of Washington in the Fall of 2015. I then somehow got an internship at NASA MSFC in Huntsville in the summer of 2017 and was promptly hired by Virgin Orbit in Long Beach, CA after graduating in June of 2018, to become a Structural Dynamics Engineer for LauncherOne, an air-launched rocket dropped from under the wing of a 747.

After only a short while, I moved back home to Seattle to work for Blue Origin on their New Glenn Rocket, which is destined to take humans back to the moon. This was a very difficult decision to make, as I loved my job at Virgin Orbit, but I am a PNW girl at heart, so when I was presented with the opportunity to work at Blue Origin, I decided to take it.

The last 2 years have really proven to me that going back to school, even at a more “advanced age”, was worth the 5-year struggle bus I had been on. 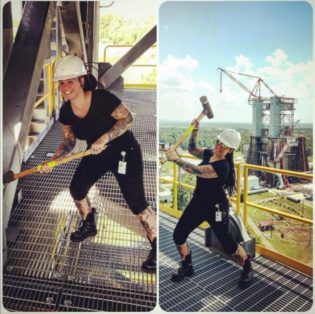 Unfortunately, I did not have the capacity to spend a lot of time or energy on SWE events while in school. I would have liked to but was struggling to stay on top of course load, while battling severe test anxiety, that I suddenly acquired after being accepted at UW. So, I am trying to make up for it now. They have been a huge help in building my confidence and offering networking events for women, which encouraged me to apply to jobs and internships that I previously shied away from.

The biggest push towards finding confidence came after I stumbled across an article posted through some SWE outlet somewhere, mentioning “imposter syndrome”. This imposter syndrome is something I had never heard of before, and the first time I read its definition, it was like a lightbulb went off in my head.

“Imposter syndrome can be defined as a collection of feelings of inadequacy that persist despite evident success. ‘Imposters’ suffer from chronic self-doubt and a sense of intellectual fraudulence that override any feelings of success or external proof of their competence” (Source: Harvard Business Review, May 7, 2008)

“The imposter syndrome is a psychological term referring to a pattern of behavior where people doubt their accomplishments and have a persistent, often internalized fear of being exposed as a fraud.” (Source: Psychology Today, Sept 3, 2018)

Feeling like you don’t belong, or you don’t know enough to succeed or know so much less than everybody else, was something that I experienced constantly and I had no idea that this was a very, very common symptom of being female in a male-dominated field (or by extension, a minority of any sort).

Combating this feeling and raising awareness of this to other women and/or other minorities affected by this, is something I will work on until the day I die. That moment of realizing that everybody is to some degree applying “fake it, till you make it”, even the most experienced of people in any field, was a crucial one and marked a day of change for me in terms of how I viewed the (professional) world around me.

It’s been a wild ride, but I am glad I took it! I wish I had had role models in STEM growing up, maybe I would have found my way into engineering way sooner. I don’t regret any of my life choices, they made me to who I am today and I like that person, but it’s important to me to try and inspire the next generation (or even older people, who felt stuck like me) to pursue careers in STEM fields and help women have a stronger presence in the field! 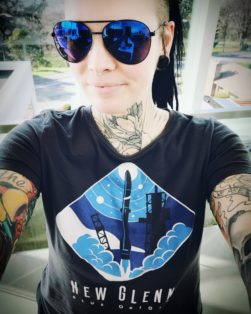 “Combating this feeling and raising awareness of this to other women and/or other minorities affected by this, is something I will work on until the day I die.”
-Melanie Wullaert