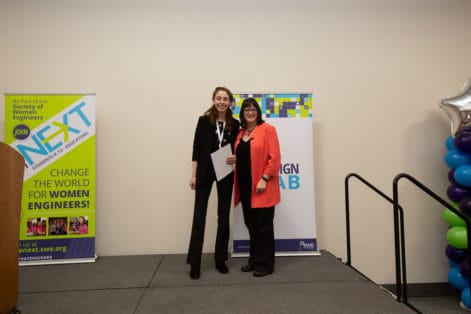 On Saturday, February 1st, I climbed the steps of the San Diego Convention Center to attend the SWENext DesignLab. This would be an event that would soon rank amongst the most engaging and rewarding experiences of my life.

As treasurer and secretary of the SWENext club at Patrick Henry High School, I had the privilege of interacting with many inspiring women engineers encouraging younger girls to embrace their passion for STEM. However, DesignLab was my first time attending a major SWENext event.

After signing in, I had the pleasure of reconnecting with old friends and meeting new ones during the icebreaker. From San Diego to Sacramento, there were girls from all over California as well as SWENexters from Washington and Arizona. Meeting these like-minded young women from across the West made me realize what a vast support network SWE truly is! I knew I found my community.

One of the highlights of the day was the bias training given by Mary Zeis. We learned about the various types of bias and how to recognize them in ourselves and our interactions with others. Comprehending bias is essential to addressing the stereotypes and barriers that discourage women from entering STEM fields. Mary also educated us on the importance of role models in promoting gender diversity. After the training, we understood not only the traits that define a strong role model but the path to becoming effective leaders ourselves. 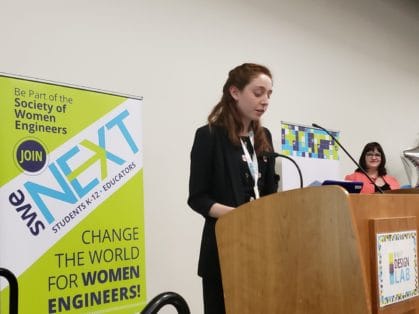 The role model training was exemplified by the WE Local Power Hour Keynote Lunch, where groups of SWENexters were escorted to lunch by professional female engineers. They shared their experiences as professional women engineers, their inspiration for pursuing a STEM career and the obstacles they faced and overcame as females in a traditionally male-dominated field. Collegiate members of SWE were also present, and it was truly inspiring to see the continuation of SWENext clubs in higher education.

However, these outstanding female engineers were not the only role models at DesignLab. Each SWENexter that was present, from the members of the DesignLab teams to the individual award winners, were role models. Throughout the day, DesignLab teams presented engineering solutions to a plethora of community issues such as cerebral palsy, teen stress, recycling, water pollution and earthquake readiness. I was inspired as I listened to the presentations given by passionate high schoolers who are dedicated to using their STEM talents to create positive, sustainable improvements in their communities. It was an honor to be a part of this intelligent and innovative group of girls. I can see many of these girls returning to DesignLab as professional engineers to mentor the next generation of SWENexters, as I hope to do one day.

Emerson Utgaard is a 10th grader at Patrick Henry High School.  She won both a STEM in Action Award and the Best Essay Award at SWENext DesignLab at WE Local San Diego