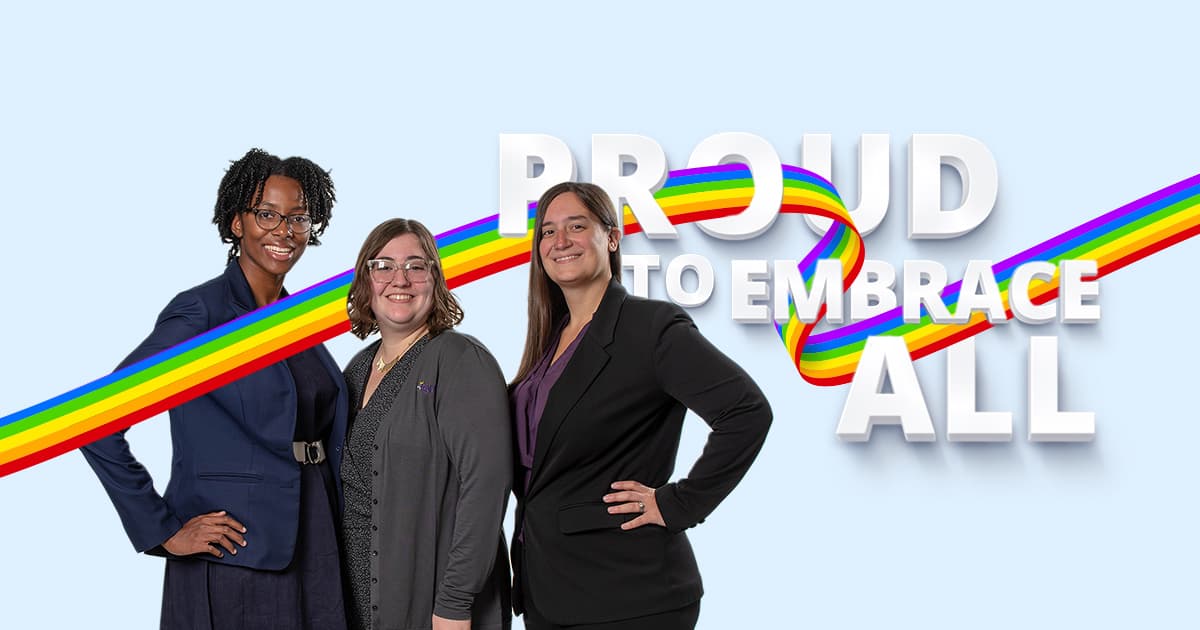 In celebration of Pride Month, SWE will be highlighting outstanding members in a series of blog posts showcasing their professional and personal accomplishments.

In our last article of this month, we will be highlighting Marcie Mathis (Electrical Engineer at Puget Sound Naval Shipyard),  Micki Rentauskas (Undergraduate at the University of Illinois at Urbana-Champaign, studying electrical engineering with a minor in Gender and Women’s Studies), and Shahar Tsameret (Undergraduate Junior at the University of Minnesota-Twin Cities, studying bioproducts and biosystems engineering with an emphasis on environment ecological engineering). 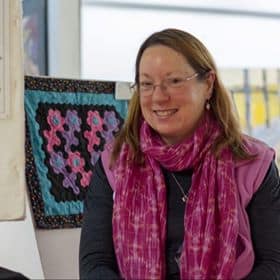 Marcie Mathis (she/her) has spent most of her career in federal service, working for the Department of Defense. She’s held several roles and currently works in the quality division of the Engineering Department at the Puget Sound Naval Shipyard.

Growing up in San Diego, CA, Marcie moved to Bremerton in 1984 after marrying a US Navy submariner. She started her engineering education at the local community college, Olympic College, then transferred to the University of Washington and finished her BS in electrical engineering in 1990.

Marcie describes herself as having an “activist streak” early on – she was a feminist in the 1980s and became actively involved in LGBTQ Rights when she came out later. Marcie’s work uplifts other LGBTQ people by providing community: she helped found and is a co-lead for both SWE’s LGBTQ+ and Allies Affinity Group and her LGBTQ Employee Resource Group.

Currently, she serves on the board of the Kitsap Pride Network, the National Organization of Gay and Lesbian Scientists and Technical Professionals (NOGLSTP), and the SWE Magazine Editorial Board. Marcie is the chair of the Kitsap County Council for Human Rights. She has helped organize the local Kitsap Pride event and been involved with PFLAG for 18 years.

One of the things she does to keep take care of herself is to do hand sewing, mostly quilts. “I don’t make big ones, or make anything fast, but the hand sewing is relaxing and centering. The piecing technique I use the most is called English Paper Piecing. I have been quilting for about 45 years since I was in high school. Recently I discovered, and have thoroughly enjoyed being part of, the Modern Quilt Guild. I love the energy and inclusiveness of the group!  One of my interests is the intersection of Human Rights and quilts, a few of my quilts are related to human rights. I have seen many inspiring quilts made by others.” She has participated in a SWE quilt challenge, which was displayed at the WE conference – Marcie’s block seeks to “pictorially show the feeling of finding SWE when most of my fellow students and co-workers were men.”

For Marcie, Pride is a time for community and understanding:

“When I think of Pride, I think of the freeing feeling of being in a place where I don’ t have to have my guard up.  I mostly don’t notice my guard being up until I get to let it down.  In some ways, my first big Pride event (Seattle Pride 2000) was a lot like my first SWE Conference (Sacramento, CA  1988 or 89?)– the feeling of being around so many people “like me.”

That feeling is something I won’t get with virtual events, and I will really miss that this year.”

Micki Rentauskas // Undergraduate at the University of Illinois at Urbana-Champaign, studying Electrical Engineering with a minor in Gender and Women’s Studies 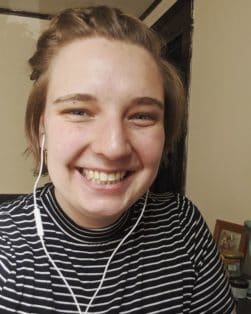 Micki Rentauskas is an undergraduate studying electrical engineering at the University of Illinois at Urbana-Champaign, with a minor in Gender and Women’s Studies. They identify as a queer, non-binary woman and use they/them/theirs pronouns.

Micki specializes in power and energy and is currently working at Tesla for their second internship at the company, helping with system testing for vehicle chargers. They will be graduating this December and hopefully going full time. In their free time, they like to read, run, play their Nintendo Switch, and hang with their cat Ros, whose namesake is Rosalind Franklin. On-campus they are very involved with their SWE section and a club called Women of Pride.

Micki cares deeply about diversity in engineering and within SWE: they note that the coolest thing they’ve done recently has been helping their collegiate SWE section with Diversity and Inclusion initiatives for LGBTQ+ individuals. Micki held a really fun ally workshop last semester and got to share their thoughts and feedback on our section’s efforts, and what an inclusive environment looks like to them and other queer folks. Some things that can help create a more inclusive environment, they say, include pushing for normalized pronouns disclosure, correcting people when they misspeak, and making outreach events less “gendered”. Micki credits UIUC SWE’s leadership as always very receptive, and they are excited to see what this next school year brings and help out as much as they can.

Being queer in engineering has been a journey, Micki says: “I started college deciding to finally be out in all aspects of my life, so I was figuring out navigating school, gender, and sexuality all at once. Being a woman in engineering has many challenges on its own, but not looking like other women engineers and being on the LGBTQ+ spectrum really complicates my position in D&I spaces because it’s hard to tell if I’m truly welcome at times. Luckily, I’ve learned that many of these groups are quite receptive to feedback and suggestions, they just haven’t really felt comfortable explicitly stating their inclusion since they haven’t had queer folks on their leadership boards. I do feel like I need to advocate for myself and other queer people in my field often, so it is super important to empower allies to help when you don’t have the energy to expend or need some help!”

When asked for advice to a young queer person starting college, Micki says seeking out queer spaces on campus has been invaluable:

“Many queer engineering majors don’t feel comfortable pursuing these resources since many members of LGBTQ+ campus clubs are non-STEM majors, but I’ve met my closest friends in these groups!”

Also consider trying out a gender/sexuality course: “This is also another great way to meet other queer folks and allies, and understand systemic issues which cause discrimination and the intimate intersection of LGBTQ+ struggles with other groups’ struggles.” Micki took a Gender and Women’s Studies class because they thought the title sounded interesting and it fulfilled a GenEd requirement, and they ended up loving it and pursuing a minor!

Shahar Tsameret // Undergraduate Junior at the University of Minnesota-Twin Cities, studying Bioproducts and Biosystems Engineering with an emphasis on Environment Ecological Engineering 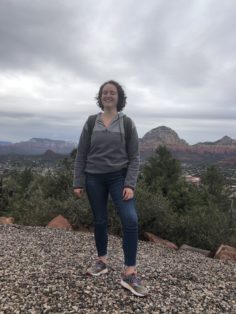 Shahar Tsameret is an incoming junior studying Bioproducts and Biosystems Engineering with an emphasis on Environmental and Ecological Engineering, at the University of Minnesota – Twin Cities. On-campus, outside of SWE and oSTEM, Shahar is involved with IfNotNow and UMN’s Institute on the Environment, where she advocates for a transformation of American Jews’ attitudes towards Israel and for environmental justice.

Shahar cares deeply about queer inclusion in STEM and will serve as oSTEM @ Minnesota’s president this upcoming year. Although queer students in STEM are often isolated, she says her story defies that narrative: “being queer has given me an amazing support group; I have two close friends in my major who are both queer, and they make my classes enjoyable and doable. Since we became friends, I’ve even started looking forward to class because I know I’ll get to see them. Their influence has raised my GPA, improved my mental health, and quelled my doubts about not fitting in as a queer person in STEM.” She is involved in formal organizations for LGBTQ engineers like oSTEM and Out for Undergrad, a series of professional conferences for LGBTQ undergraduates, where she’s been able to network with like-minded students and meet queer-friendly employers.

Outside of school, she likes hiking, running, and reading mystery novels. Her family loves the outdoors and they go on hikes pretty often, including a nine-mile hike a few months ago. She’s enjoyed getting outside more during the COVID-19 pandemic: “since I go to college in Minnesota, where it’s cold during the school year, I have trouble finding time to spend in nature. As such, when UMN closed its campus in March, my silver lining was that I would at least get to spend the spring with my family in Phoenix before it gets too hot outside.”

For students entering the field, Shahar recommends getting involved in organizations like oSTEM, if there is a chapter near you, and reaching out to other queer individuals like grad students or professors, who can serve as mentors and set you up for success. Although we’ve had to rethink this Pride, Shahar sees a positive side:

“it’s turned from a sea of rainbow capitalism into a real show of solidarity with the Black Lives Matter movement. It’s exciting to see so many queer people out in the streets protesting or showing solidarity from home by donating, educating others, and putting pressure on elected officials.”