In observance of World Oceans Day, we are sharing this Parley article on six women pioneers of ocean exploration.

“Six Pioneers of Ocean Exploration Who Happen to Be Women” was originally published on Parley.

To date, only three people have reached the deepest point on the planet’s seabed. All of them are men; none of them got there without the contributions of women. How do you inspire the world’s future female leaders in ocean conservation? Encourage them to explore, and honor the pioneers who have led the way.

From the shorelines of the Maldives to the depths of the Marianas Trench, women in ocean science and exploration have shattered glass ceilings for decades. On March 8th, we celebrate International Women’s Day and reflect on the progress women have made in society and especially marine science. In a field largely dominated by male leaders, courageous women changed the ways we see and understand this planet’s greatest unknown — the oceans — and in the process propelled the future of females in oceanography.

Below are six [inspirational] trailblazers who helped define the ocean space and the role of the female explorer within it: 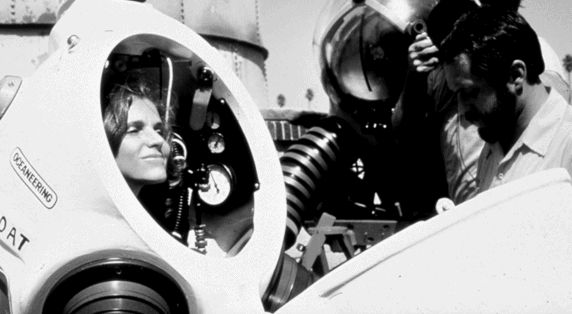 Growing up, Dr. Sylvia Earle was constantly inspired by her surrounding natural environment. At the age of 16,  she was driven by a desire to explore underwater mysteries and attempted her first dive, before the creation of SCUBA, with a diving helmet. 28 years later, Earle became the first woman to walk the ocean floor 1,500 feet below the surface. She completed her famous two-hour ocean floor walk in a pressurized metal JIM suit.

Earle was responsible for leading the first all-women team to live in an underwater habitat for two weeks on the Tektite Project. As a woman biologist during a time of “bearded scientists,” it was evident that female leadership in ocean sciences was unheard of. She earned universal respect from the scientific community and made it possible for women to remain at the forefront of the ocean exploration movement. With 60 expeditions logging more than 7,000 hours beneath the surface, Her Deepness has set, and continues to set, a standard for male and female scientists across the world. We are honored to have Dr. Sylvia Earle as our Chief Science Officer at Parley.

As a pioneer for both ocean navigation and feminism, Maria Mitchell became the first woman-elected Fellow of the American Academy of Arts and Sciences in 1848. While growing up on the island of Nantucket, she explored the stars and was entrusted by local mariners to handle complex navigational calculations for whaling trips at the age of 14. Mitchell’s curiosity led to the discovery of Miss Mitchell’s Comet in 1847. She continued research within the field of astronomy, influencing her work for the U.S. Nautical Almanac Office that assisted sailors with navigation at sea. Mitchell was eventually hired as a full-time professor at Vassar College, where she promoted equal pay for equal work when she discovered her male counterparts were receiving a higher salary for the same position. Maria Mitchell led scientific discovery through curiosity and a strong will to succeed, and became a role model for future female explorers.

Marie Tharp redefined the role of women in the field of subsurface geology as an oceanographic cartographer. Equipped with detailed analytical skills, Tharp kick-started her scientific career at Columbia University’s Lamont-Doherty Earth Observatory lab. The head of laboratory operations pushed researchers toward the oceans to study the seafloor as sonar technology developed. However, navy regulations restricted Tharp from setting foot on research vessels, since she was a woman. As her lab-mates spent years at sea collecting data, Tharp carefully examined the numbers and charted them out by hand. In 1956, her work was published; she had discovered the mid-ocean ridge, also known as “the backbone of earth.” Bruce Heezen, Tharp’s research supervisor and partner in creating the 1977 World Ocean Floor Map presented the discovery publicly.

She was the woman who mapped the ocean floor, disproving the theories promoting an entirely flat seafloor. Like many women in the 1950s her role was diminished by gender stereotypes, yet her renowned map still hangs in the offices of ocean scientists around the world.

One of the most celebrated nature writers of the twentieth century, Rachel Carson is widely credited for her advancement of the environmental movement and the creation of the U.S. Environmental Protection Agency. As a trained marine biologist, she used her scientific background and voice to advocate for ecological conservation, inspire fascination in the interconnected web of life, and to question the long-term consequences of humanity’s synthetic so-called “mastery” over the natural world. Carson was met with many obstacles as an intelligent woman in the 1950s workplace. Critics dismissed her theories, and due to her gender status sometimes exclaimed she was hysterical to blame human’s pesticide use for major ecosystem damage in Silent Spring. However, she prevailed by challenging the forces she needed to, overcoming through scientific literature and environmental advocacy.

Dr. Cindy Lee Van Dover was the first, and only, female pilot of a (wo)manned deep-diving submersible known as Alvin, and has since led 48 expeditions. Her fascination with deep sea exploration led to the discovery of strange organisms like deep sea vent tube worms and similarly weird and wonderous forms of alien life. Out of 42 engineers and former Naval commanders, she remains the only woman to pilot the Alvin, and hit a biological breakthrough in discovering the largest deep-sea hydrothermal-vent area along the Galápagos Rift — a site we may never have endeavored to explore without the discovery of the mid-atlantic ridge by the aforementioned Marie Tharp.

Although whales remain as mysterious and elusive as ever, our knowledge of the ways they communicate has increased drastically in a relatively brief period of time. Katy Payne, a researcher in acoustic biology at the Cornell Lab of Ornithology, had a lot to do with that — and so did her ear for music. In the 1960s, scientists started recording whale sounds beneath the surface. Katy and her husband, Roger Payne of Ocean Alliance, were the first to recognize that the calls of humpback whales are not sounds made at random, but complex songs that are collectively composed and evolve over time. Katy’s accomplishments in the study of bioacoustics and whale research offer a lesson in perspective: there is always another way of hearing and seeing, especially beyond surface level.

Current generations are more educated on environmental issues and are more interested in careers with purpose and impact. A responsibility we all share is teaching children the value of gender inclusiveness and relaying a message of positivity and progress to the young women and girls who are motivated to work towards an eco-innovative future.

There is still progress to be made, but we admire the women pioneers who forged the path for women in science. We live in a world where young aspiring female scientists who wish to explore and engage with the natural world can — a world where a new class of Ocean Guardians can emulate and continue the examples of female role models. The future of ocean conservation and exploration necessitates focus, and unfortunately gender biases persist for females in science. The women traveling down this road must believe in their abilities and continue to question with courage and imagination. And those who support the next class of pioneers must empower and encourage them at every step.

We all depend on the ocean. Our fate is intertwined with the marine environment, and therefore with the women (and men) who aspire to save it.

Parley is the space where creators, thinkers, and leaders come together to raise awareness for the beauty and fragility of our oceans and collaborate on projects that can end their destruction. Learn more about Parley.