Emily Calandrelli is an MIT-educated engineer turned Emmy-nominated science TV host and author with a mission to spark an interest in STEM in the next generation.

Growing up in Morgantown, West Virginia, Emily Calandrelli never imagined that one day she would be an MIT grad, author of a children’s book series, host of a TV show, and a STEM role model.

In grade school, Calandrelli wasn’t exposed to engineering, but she did know she loved math. It was not until her senior year in high school that she started researching jobs with high starting salaries and learned having an engineering degree would be a good starting point.

She was the first person in her family to pursue STEM. She knew little about majoring in engineering, but she quickly found opportunities to explore it through the NASA Space Grant Program and realized how much she enjoyed it.

Calandrelli graduated with a bachelor’s degree in mechanical and aerospace engineering from West Virginia University. Then, she went on to earn two master’s degrees from the Massachusetts Institute of Technology (MIT), one in aeronautics and astronautics and the other in technology and policy.

A YouTube video featuring Calandrelli promoting West Virginia University caught the attention of producers developing an educational TV series about STEM. She began hosting Xploration Outer Space. The TV show not only allows viewers to learn about amazing new science projects and discoveries, but it also allows Calandrelli to expand her own knowledge.

“We create about 10-13 new episodes every year,” Calandrelli says. “Each episode has four segments with science projects, so every season we have 40-50 new projects. Many of the projects are things I am discovering for the first time myself. I’m constantly learning, and I get to work with the smartest people in the world.”

Xploration Outer Space is a Saturday morning TV show on FOX that reaches up to 100 million households each week. The show has been nominated for three Emmy Awards in the writing, hosting and overall children’s programming categories. Calandrelli and the crew travel to various NASA centers, private space companies and universities to reveal the coolest aspects of the space industry.

Calandrelli has also worked closely with Bill Nye as a correspondent on his show, Bill Nye Saves the World. Through Nye’s show, she has been able to engage with scientists around the globe, coming up with new ideas for her show. 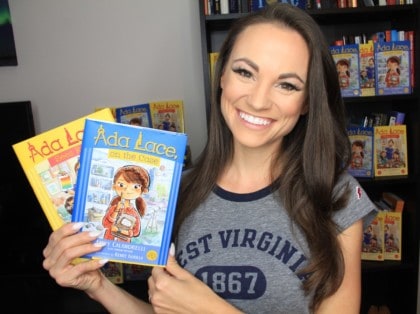 She enjoys teaching students through visual learning and through literature as well. After realizing there weren’t a lot of books featuring girls as the main character, she decided to create a book series with a STEM focus from a girl’s point of view. Calandrelli is the author of Ada Lace Adventures about a little girl who loves science and technology. Calandrelli’s second book in the series, “Ada Lace Sees Red,” was selected as one of the Best STEM Books for Kids by the National Science Teachers Association. At one of Calandrelli’s readings, she noticed that there were even more boys in the audience than girls.

“Ada Lace has been able to provide every child with a role model, boys included. It just so happens that the role model is a girl,” says Calandrelli.

She views her writing as an opportunity to learn even more about STEM. In her third book, “Ada Lace, Take Me to Your Leader,” the main character uses a ham radio. Calandrelli was familiar with ham radios, but not well versed, so she did extensive research on the topic.

“It was a steep learning curve for me, but I enjoyed it,” Calandrelli explains. “It forced me to learn all the science behind something, then teach it to kids through the book.”

Calandrelli hopes to expand the Ada Lace series into a TV show one day.

“Every kid learns about science in a different way, whether it’s toys, reading or science experiments,” says Calandrelli. “Expanding the Ada Lace stories into a TV series would help kids who learn better in an audio-visual way.”

Whether it’s through hosting a TV show or writing books, Calandrelli wants to help the next generation become as excited about STEM as she is.