“Membership in SWE Is a Valuable Asset”

The notion of recruiting SWE members for employment began in the mid-1950s with a simple letter to the editor of the SWE Newsletter. It eventually opened the way to shedding the newsletter in favor of a magazine format, and from there, expanded editorial content, professional staff, and establishing recognition for key magazine advertising supporters. Now, in conjunction with the Society’s 70th anniversary, and in recognition of SWE’s many communication channels, we present the Diversity Drivers. Here’s a brief look through the years. 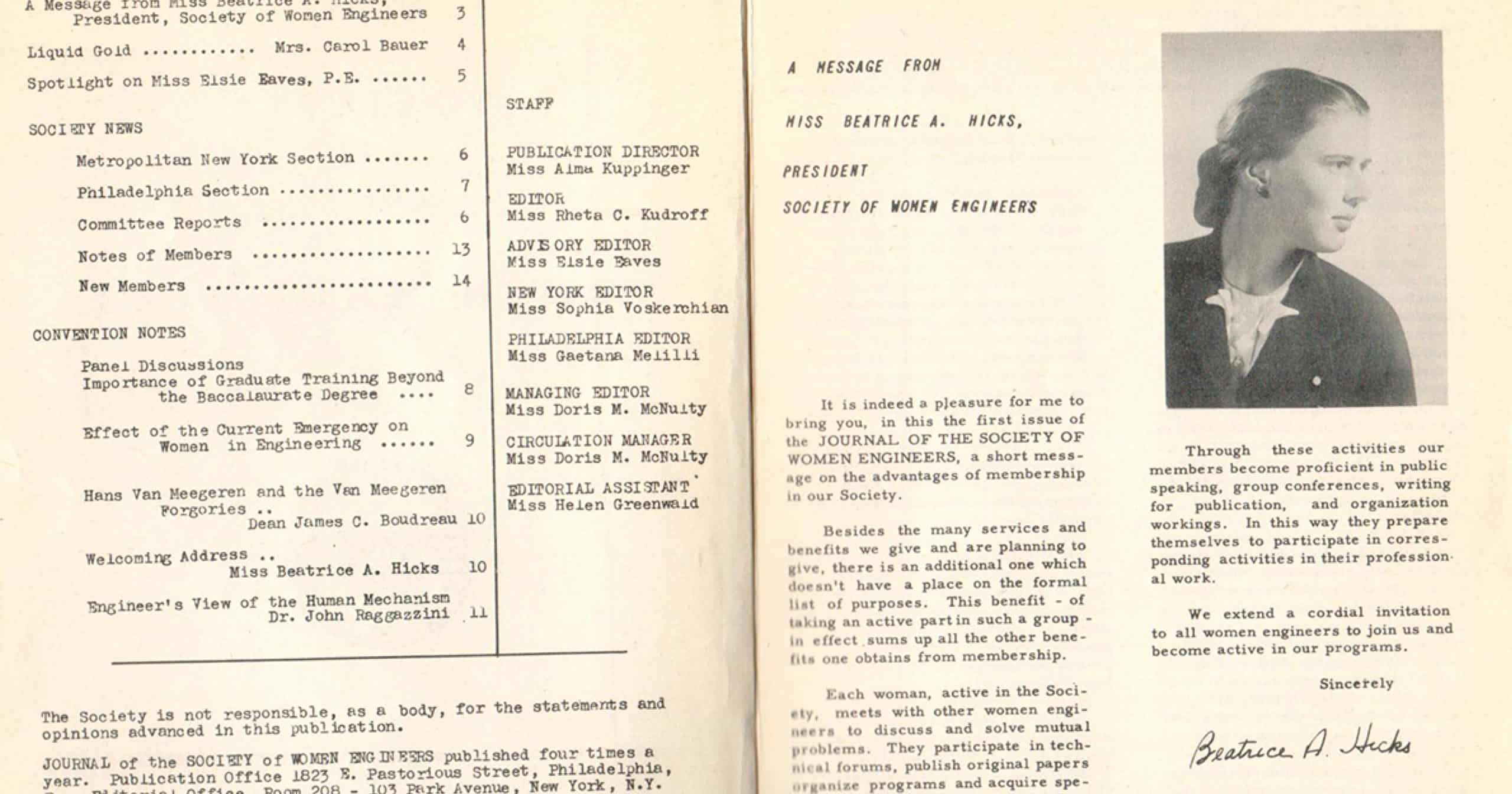 The first of the Society’s publications, the Journal of the Society of Women Engineers, was published in spring 1951, just one year after the organization was founded. Conceived as both a member benefit and a voice for women engineers, the journal was published quarterly and put together by a volunteer staff.

The only member of the team with professional publishing experience was advisory editor Elsie Eaves, P.E., whose input must have been critical. With a degree in civil engineering from the University of Colorado Boulder, in the early 1920s she moved to New York City and began working on the Engineering News-Record, then at McGraw-Hill Publishing Co. When SWE was founded, Eaves had been working in publishing approximately 25 years.

At 16 pages, the first issue of the Journal of the Society of Women Engineers had one page of advertising that consisted of four business cards stacked upon one another. (The use of members’ business cards as a method of advertising continued off and on, well into the 1990s/early 2000s.) The 15 pages of editorial content included a letter from the first president, Beatrice Hicks; a technically oriented article on petroleum, otherwise referred to as “liquid gold”; and a profile on Eaves. There were also news items from the Metropolitan New York and Philadelphia sections; committee reports; new member listings; and a synopsis of activities from SWE’s first “convention,” held in March 1951.

From journal to newsletter to magazine

By 1954, the Society had grown to encompass local sections across the United States. The work of the organization was performed almost entirely by volunteers — and keeping members informed of the various activities, events, and section and member news did not suit the journal format. The SWE Newsletter was launched as a monthly publication in August 1954, replacing the journal.

A seemingly small but significant development occurred in 1956, when S.D. Michaelson, the chief engineer of a division of Kennecott Copper Co. in Salt Lake City, sent a letter to the editor of the SWE Newsletter:

“I have read with much interest your February 1956 SWE Newsletter. Our company has not done much in employing women engineers, and to date has only one person in this classification, at our Nevada Mines Division at Ruth, Nevada. She is working primarily on mine maps. Our department handles not only the mining and metallurgical work for many divisions … but also handles the major project design work. Therefore, we have important need for engineers in all categories of design, specification work, and estimating. Since our office is very well located amid attractive surroundings, we believe that this would be a good place to use women engineers and we are interested in giving this a serious try.” 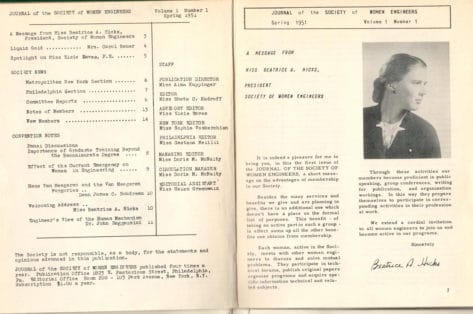 The correspondence shows both an open-mindedness for the time in giving women engineers “a serious try,” and awareness that one of the ways to reach women engineers would be through SWE’s publications and activities.

A follow-up in the February 1957 edition of SWE’s newsletter showed Kennecott Copper Co.’s pride in its first woman engineer, Ruth Ann Richmond. “News releases and photographs were sent out on Miss Richmond, and articles appeared in each of the house organs published by the several divisions of Kennecott Copper,” the company reported. Richmond is described as a mechanical engineering graduate of the University of Nebraska who worked in Kennecott’s research center on The University of Utah campus.

For more than 25 years, SWE continued publishing the newsletter, relying on volunteers. Some iterations were printed on yellow paper with green ink, in an effort to replicate the Society’s original brand colors of green and gold.

As time went on, equal opportunity employment laws were put into effect, which meant employers needed to reach women job candidates. Concurrently, SWE membership also expanded dramatically, particularly in the 1970s, with the women’s movement and other social change in the air. There was so much more activity to report, plus the Society’s relationships with corporations and institutions had advanced. One of the outcomes was an uptick in advertising support. These factors led to the newsletter format changing to a magazine, titled U.S. Woman Engineer, with the March/April 1980 issue.

“Not too long ago — 1993 — it became apparent to the SWE Editorial Board that the similarities between the two magazines were confusing advertisers whose intention was to support SWE, as well as some readers. In addition, with the ever-increasing greater globalization of SWE members, a title that did not imply a limitation to one part of the world was deemed more appropriate. The new name, SWE, Magazine of the Society of Women Engineers, made its debut with the July/August 1993 issue.”

In conjunction with SWE’s 50th anniversary, a new avenue of support for the growing number of advertisers was established with the SWE Heritage Club. By then, the magazine was under the direction of a professional editor/writer, working closely with an engaged editorial board and a sales representative focused primarily on SWE advertising.

That year, the opening pages of each magazine listed Heritage Club companies against a background made to resemble parchment, noting that: “As the Society of Women Engineers celebrates its 50th anniversary, we applaud the following employers for their ongoing commitment to advertise in SWE Magazine. Through such efforts to recruit technical women, these employers demonstrate their commitment to diversity and their knowledge that membership in SWE is a valuable asset.”

That commitment to diversity and knowledge that “membership in SWE is a valuable asset” has remained constant. In keeping with the many changes in the SWE organization and the publishing and communications landscape, SWE Magazine is celebrating this significant 70-year milestone with the Diversity Drivers, formerly the Heritage Club. In the words of our promotion piece applauding the Diversity Drivers, “These employers are conscious supporters of diversity, inclusion, and recruitment marketing. By sharing stories of innovative projects and influential women through SWE’s powerful channels, Diversity Drivers accelerate intentional inclusion in engineering.”