Skip to content
SWE's Ongoing Work for Intentional Inclusion >
WE20 Has Gone Completely Virtual >
TRENDING
WE21 is This Week! Get Ready! 15 hours ago
Insights from the 2021 Science and Technology in Society Forum Annual Meeting 4 days ago
Next
Prev
Facebook-f Twitter Linkedin-in Youtube Soundcloud Instagram Flickr 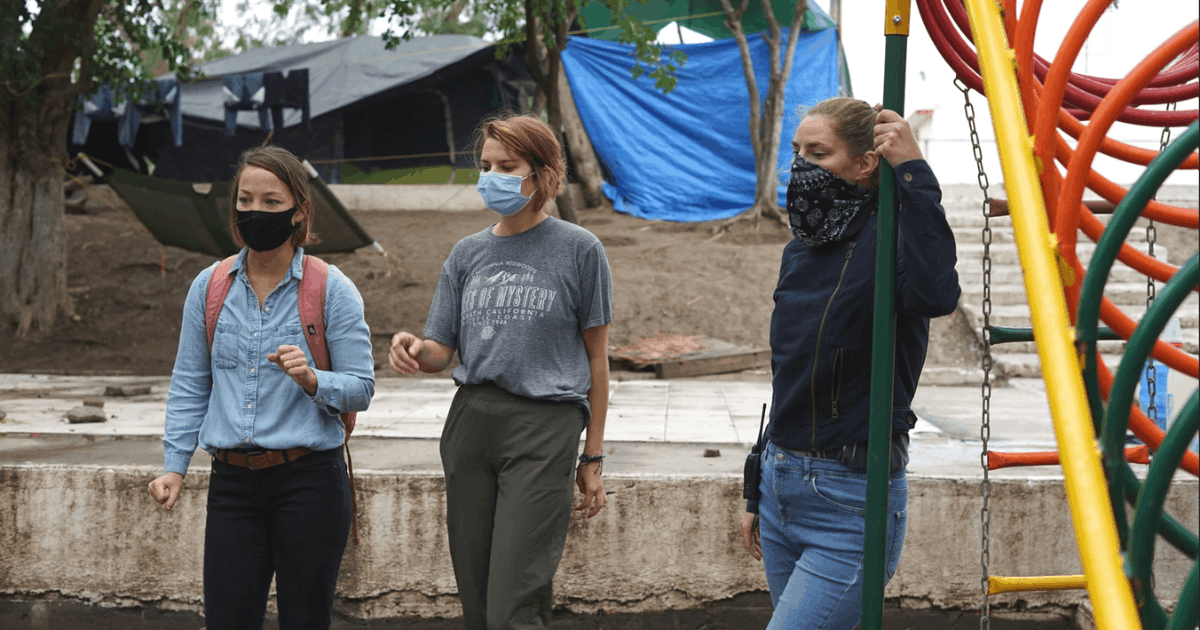 A lot of things have changed at the migrant camp in Matamoros since engineers Erin Hughes, Chloe Rastatter and Christa Cook arrived.

They decided to volunteer their time and improve the quality of life of those living there by partnering with other organizations such as Team Brownsville to build hand washing stations, construct showers, manage solar power for field hospitals, dig over 1000 feet of drainage channels and more.

The three engineers recently formed their organization called “Solidarity Engineering” to respond to the needs of those living at the migrant camp. Hughes, Rastatter and Cook met at the border after listening to the same podcast that talked about the camp back in 2019.

“We all separately heard it, we didn’t know about each other,” Hughes, principal engineer, said during an interview at the migrant camp.

“In the episode, it was mentioned that a lot of the illnesses that everyone was dealing with was because they were drinking contaminated water … and I heard that and I was like ‘OMG, I’m an environmental engineer, I know how to filter water’ and so I contacted Global Response Management. Unbeknownst to me, Chloe and Christa also contacted them and, at that time, Global Response Management did not have any engineering branch. So, they said we could come down and get in touch with the Resource Center in Matamoros because they do a lot of the infrastructure at the camp.”

Hughes started volunteering from her home in Philadelphia but felt that what she was doing was not enough and decided to quit her job, move to Brownsville and volunteer full-time at the camp in Matamoros.

Ever since they arrived, the three women engineers have partnered with Global Response Management, Team Brownsville and the Resource Center in Matamoros to filtrate water; redesign and fix showers; dig over 1,000 feet of drainage channels and berms throughout the camp to direct stormwater to the river and out of peoples’ tents and living areas; fundraise, locally source and build a 30 foot by 24 foot playground for 300 kids, among many more.

When asked about the importance of helping the asylum seekers at the camp, Hughes said we are all human and those living there have risked their lives to get to the border and the U.S. closed their doors to them.

“They risked their lives to come up here,” she said. “They are seeking asylum and we closed their doors to them. I’m ashamed of that and this was my way of doing something about that. I don’t agree with how my government handled that. These people are coming because their lives are threatened and they have no other choice.”

Rastatter said the three of them are the only engineers who showed up and stayed and added they all share the same core belief that people living in the community should be the ones guiding them in both the prioritization and implementation of projects.

“We are individually and collectively passionate, resilient and capable,” she said. “There is a need at this camp because of the substantial lack of government support. If everyday citizens don’t do something to help no one will.”

Rastatter is from Boulder, Colorado, and said just because the government is not doing anything to improve the situation of the asylum seekers does not mean she can’t.

“Imagine living in a tent in an unfamiliar place, with no sense of security or what the future will bring, no access to showers for a year, and away from your family and familiarity,” she said referring to the asylum seekers.

To help their efforts, you can donate to the cause here.