In our SWE Endowed Scholarships series, we'll feature one endowed scholarship each month. These blog posts will highlight the scholarship's namesake, the amount awarded and any relevant criteria for application. This month, we feature the Alma Kuppinger Forman, PE Scholarship. 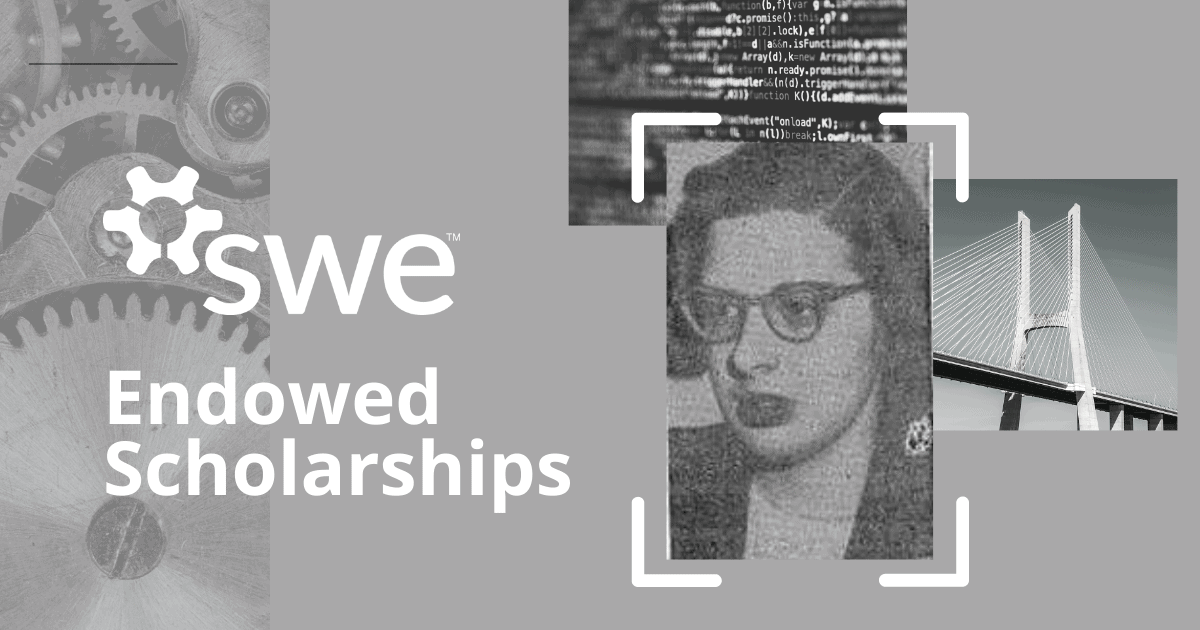 Share
Tweet
Share
Email
More
0 Shares
In our SWE Endowed Scholarships series, we’ll feature one endowed scholarship each month. These blog posts will highlight the scholarship’s namesake, the amount awarded and any relevant criteria for application. This month, we feature the Alma Kuppinger Forman, PE Scholarship.

The Alma Kuppinger Forman Scholarship was formerly a SWE Region E scholarship. Undergraduate students in their sophomore, junior, or senior years and studying any engineering related major at a college or university in New York, New Jersey, Pennsylvania, Delaware, Maryland, or Virginia are eligible to apply. NOTE: SWE membership is required for this scholarship.

Alma Kuppinger Forman, a SWE and Philadelphia Section Charter Member, has been a member of the Philadelphia Section since its inception. She is one of the women engineering students at the Drexel Institute of Technology, now Drexel University, who in November 1946 “organized a society to promote friendship and to help each other with problems.” In the early days when she was a senior and chairman of the SWE group, she had to go to Dr. James Creese, President of the Institute, to get money to sponsor activities such as the 1949 first SWE conference.

Alma ran against Dr. Beatrice Hicks, who became the first SWE President. During SWE’s formative years, Alma served on the National Board of Directors and the Nominating Committee as well as Chair of the first Eastern Seaboard Meeting that was held in Philadelphia in March 1955, several terms as Section Chairman, and editor of the Philadelphia section newsletter called “SWE Outlook.

In later years, most of her activities centered on working with students. As an engineering professor at Temple University, Alma encouraged the women engineering students to form a SWE collegiate section, and she served as Faculty Advisor to the section until she retired in 1995. She continued to work with Temple’s outreach programs for another three years. In recent years Alma has provided many archival materials and other background on the genesis of the Society and the Philadelphia Section. She was named to the section’s Hall of Fame in 1990. Alma’s husband Ross encouraged her SWE activities and was one of the driving forces behind the formation of a group of SWE member spouses called the Men’s Artillery, which was a precursor to the national SWE Men’s Auxiliary.

Alma has worked in industry and academia. Her industrial experience includes positions at Peter Paul, Inc., Kuljian Corporation, the Department of the Interior, Aero Service Corporation, and consulting with Footwear Industries of America and C. W. Dustin. Her academic experience includes lecturing at Drexel University, Montgomery County Community College, and Spring Garden College and finally as a Professor of Mechanical Engineering at Temple University; she was also Director of Computer Services for the School of Engineering and Architecture.

In 1949, Alma Kuppinger Forman became the first woman at the Drexel Institute of Technology to receive a degree in Civil engineering. She is a registered Professional Engineer in Pennsylvania.

You can apply for a SWE scholarship here.
Endowed Scholarships are managed by the SWE Board of Trustees.