Surviving and Thriving: Why Women Pursue and Stay in Engineering

After focusing on why girls reject engineering and why women drop out of the profession, a new literature review from DiscoverE targets what works and how to replicate that success. 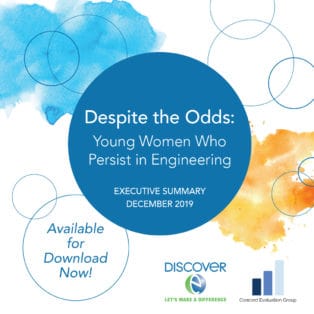 The key to engaging girls in engineering remains educating them about the profession’s value — how they can achieve success, earn a fulfilling living, and make a difference in the world, the analysis of peer-reviewed literature found.

Girls and young women also need to hear messages that let them internalize a positive message: That engineering is a learnable, transferable skill.

“They can then ask, ‘How are you setting yourself up for the future of work in a globally competitive environment?’” said Thea Sahr, director of communications and programs for DiscoverE, the nonprofit organization that organizes Engineers Week and Girl Day (formerly Introduce a Girl to Engineering Day). DiscoverE conducted the study, titled “Despite the Odds: Young Women Who Persist in Engineering,” in partnership with Concord Evaluation Group. The literature review comprised studies of girls in K-12 and young women through graduate school who succeeded in engineering studies and went on to engineering careers.

The most important factors young women demonstrated when they chose and persisted in pursuing engineering careers were:

“They needed strong family support; support of each other; and the ability to build networks,” she said. “Also, their ability to draw on a past struggle, to overcome present-day struggles — grit and resilience. It stood out that those were two hallmarks. That’s how they were surviving and thriving.”

The studies revealed some unexpected findings, too, Sahr said:

Indeed, family and community support proved to be the most salient factor that women of color identified as furthering their completions of STEM degrees. Parents and role models played particularly significant roles in encouraging female students to choose and persist in engineering programs.

DiscoverE will leverage the report’s subject matter in its free online conference, the Global Marathon, in which women in engineering and technology discuss vital issues for five consecutive Wednesdays, from March 11 through April 8.

The 2020 Global Marathon will cover:

DiscoverE’s Sahr said the group’s philosophy is that we’re all stronger together, rowing in the same direction. She said more research is needed, partly to determine whether programs to keep girls and women motivated about engineering require greater investment for expansion. The key will be collaboration and teamwork, she said.

“Surviving and Thriving: Why Women Pursue and Stay in Engineering” was written by Sandra Guy, SWE Contributor. This article appears in the 2020 Winter issue of SWE Magazine.