New IF/THEN® Initiative creates the largest database of women in STEM — and brings it to life with a record-breaking collection of the most statues of women ever assembled in one location. 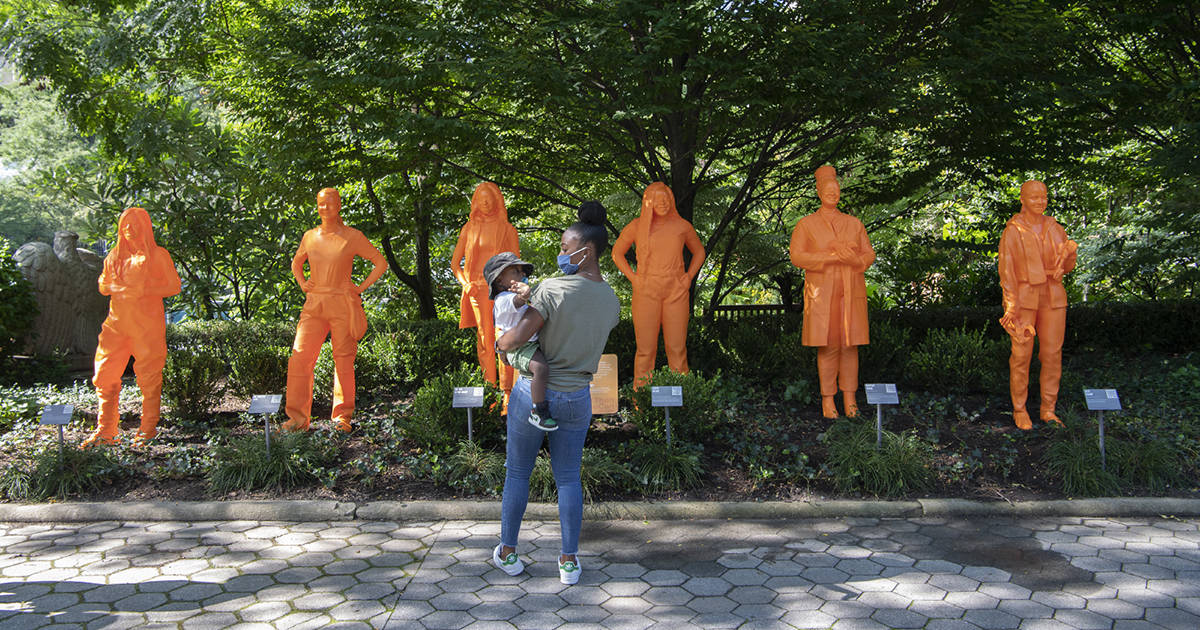 Haven’t heard of them? The IF/THEN Initiative would like to change that.

These women ambassadors of STEM — a roboticist/choreographer, nuclear engineer, coral reef biologist, YouTube software engineer, and computational biologist — are five of the 125 women who are a part of the IF/THEN Collection, a free digital resource library launched by Lyda Hill Philanthropies.

The collection, which includes photos, videos, and profiles of a diverse group of women currently working in STEM fields, was developed to grow the imagery available that represents women in STEM, to change the way society thinks about women in STEM, and to inspire the next generation of women STEM innovators.

The inspiration for the project came when representatives from Lyda Hill Philanthropies, which funds advancements in nature and science, began to notice a pattern among the women scientists they worked with.

“These women had something in common, which was they all felt a little bit like they had to make their own path,” said Nicole Small, CEO of Lyda Hill Philanthropies and co-founder of the IF/THEN Initiative. “They didn’t feel like they had role models or a cohort of women who faced some of the same challenges they had.”

So Lyda Hill Philanthropies teamed up with the American Association for the Advancement of Science to select a diverse group of 125 female STEM innovators to create a powerful new representation of career opportunities in STEM — and the women who are currently working there.

Because, while society has gotten better at introducing more students to the concept of careers in science, technology, engineering and math (STEM), more progress needs to be made in bringing those careers to life. It’s one thing for a student to hear that she can have a career as a mathematician, and quite another to learn that she can use statistics to combat modern-day slavery. Or apply chemistry to help makeup products last longer. Or use data science to analyze her favorite sport. And it’s quite another thing altogether to see a group of diverse women doing just so.

The experience of IF/THEN ambassador Ronda Hamm, Ph.D., is a prime example. Growing up, Dr. Hamm was interested in animals and considered studying agriculture and becoming a veterinarian. She applied for an FFA internship in high school, and was assigned to an entomology lab.

“I was terrified of insects,” said Dr. Hamm, who had never even heard of entomology. “I never put two and two together to think that somebody studies those creatures that I am terrified of and does that for a living and can make a successful career out of that.”

But Dr. Hamm’s experience in the lab changed her outlook. Her faculty mentors entrusted her to design her own experiment studying ants, and Dr. Hamm fell in love with the scientific process and — much to her surprise — the insects as well. The internship changed the course of her career. She went on to receive a Ph.D. in entomology and now serves as global academic relations manager for Corteva Agriscience, providing outreach education to the public.

Rae Wynn-Grant, Ph.D., also an IF/THEN ambassador and a National Geographic Society fellow studying grizzly bear movement in Montana, was fortunate to have female professors and advisors who helped mentor her interest in wildlife sciences in graduate school. At the same time, Dr. Wynn-Grant, a Black woman, never fully saw herself in these women.

“What’s really important is the intersectionality of my identity — being a Black woman is extremely, extremely important, and being a Black person in this field is extremely important because I never once had mentors, advisors, or professors who were Black — woman or otherwise,” she said. “Because it’s a part of my identity that I can’t separate, I haven’t seen people who look like me in these fields. It’s meant that race has played a really big mental/emotional hurdle in me moving through my career, and that’s also been really difficult, because as close as I’ve been with many of my amazing female mentors, race has been an uncomfortable topic to discuss. And it absolutely has been a barrier for me and certainly is a barrier for lots of people of color.”

Experiences such as Dr. Wynn-Grant’s are why the initiative was careful to represent not just women in STEM careers, but women from a variety of backgrounds in terms of race, ethnicity, religion, geography, career stage, and STEM field.

“We were really aspiring to try to show a wide array of women across a wide array of science areas and make them relevant to girls everywhere,” said Small. “We want to celebrate real women and tell their real stories.”

The end result is the largest collection of online content around women in STEM — available free for educational and noncommercial use.

The collection’s tagline — IF she can see it, THEN she can be it — was the perfect omen for what came next.

From digital collection to real-world representation

In 2019, when the IF/THEN Collection was gathered but not yet launched to the public, a study was published that had been commissioned by former treasurer of the United States Rosie Rios. In analyzing 12 major U.S. cities, it found only four statues of real women on public display in parks and downtown areas. In one poignant example, the country’s most famous park — Central Park in New York City — had 23 statues featuring historical figures, all of them male. Not one statue featured a real woman.

Knowing that public visibility is an important issue in the fight for equal representation of women, the IF/THEN Initiative brainstormed how they could utilize the collection to help address this issue of a lack of women’s statues in public spaces.

“We thought, ‘We can fix that, and we can do it really cool,’” said Small. “‘Why don’t we use technology to solve one of these problems?’”

The idea was simple, but ambitious: Turn the collection of IF/THEN ambassadors into statues that could be placed in public spaces. And, in true STEM style, the ambassadors were immortalized not out of granite or bronze, but by being 3D scanned and re-created as 3D-printed, life-size statues.

IF/THEN partnered with Amaze Design and Group Delphi to create the exhibition of statues. Utilizing two Twinstant Mobile Full Body 3D scanners — scanning booths that combine 89 cameras and 25 projectors — they generated 3D renderings of each ambassador, who posed with an object representing her work.

The 3D model was then sliced into layers to create the tool path for the 3D printer — re-creating each woman layer by acrylic-gel layer at a time — taking about 10 hours each to produce, using a Massivit 1800 Pro 3D printing machine — one of the few 3D printers with a printing volume large enough (5 feet wide, 4 feet deep, and 6 feet tall) to create the life-size statues.

Each statue was then cured in a UV curing booth and left overnight to fully harden. After support materials were removed and the shape of each statue was refined with detailed hand work, a durable paint was applied, in a bold orange color, to ensure the statues could stand the test of time in outdoor spaces.

Dr. Hamm, who toured the facility in Fort Wayne, Indiana, where the statues were printed, was at a loss for words when she first stood next to her own statue. “We are all just women in science — I don’t really feel there’s anything particularly special about me, but at that moment, the realization of how many women I represent, not just from the generation that I am in, but the generation that’s coming — that was such an honor,” she said.

All together, the collection of 122 statues featuring the IF/THEN ambassadors is the largest collection of all-female statues ever assembled in one location, at one time.

Initially slated to debut in Dallas earlier this year, the full exhibit launch has been delayed until 2021 due to COVID-19. Instead, a pop-up preview was scheduled for New York City in conjunction with the re-opening of the Central Park Zoo. The statues of Dr. Wynn-Grant; Kris Inman; Dorothy Tovar; Jess Cramp; Earyn McGee; and Kristen Lear, Ph.D. — all IF/THEN ambassadors working in the space of wildlife conservation — can be viewed at the Wildlife Conservation Society’s Central Park Zoo in New York City through Oct. 31, 2020.

The preview of the statues premiered in mid-August, just one week prior to the unveiling of the permanent monument of Susan B. Anthony, Sojourner Truth, and Elizabeth Cady Stanton in Central Park — two fitting new additions to the park to help realign gender representation in public spaces.

The IF/THEN Initiative recognizes the importance of honoring historical figures, but they’ve chosen to focus on recognizing women of diverse backgrounds who are changing the world now.

“We want to make these women and these careers relevant and accessible to everybody,” said Small. “It’s amazing if you have a world-changing discovery and win a Nobel Prize, and we absolutely want to celebrate that. But, not everybody is going to win a Nobel Prize — but that doesn’t mean it’s a field you shouldn’t pursue. So to be able to highlight someone who works at Spotify as an engineer, that’s something girls can relate to.”

To further the digital collection’s reach, IF/THEN partnered with the Association of Science and Technology Centers and its network of nearly 400 science and technology centers and museums across the United States to offer a $650,000 grant program for member museums to utilize assets from the collection to showcase more women across their exhibits, displays, and materials.

The initiative also partnered with Nepris, a network that connects classrooms with industry professionals to bring real-world relevance and career exposure to students — to launch a program that features the ambassadors. They also collaborated with GoldiBlox, whose founder is an IF/THEN ambassador, to launch Curiosity Camp, an online version of summer camp with a variety of STEM-based adventures. Another partnership, with DonorsChoose, is raising funds for educational resources, and collaborative projects with Girl Scouts of the USA and Teach For America are using the collection to supplement STEM curriculums.

Explore the full IF/THEN Collection online at ifthencollection.org, follow @IfThenSheCan on Instagram (which includes a custom filter to turn yourself into a statue), watch a video about the initiative and the making of the statues, and see the pop-up preview in Central Park.