From the time she was an undergraduate student, Faust served as a role model for future generations of engineers through her commitment to industry, outreach and service.

The Outstanding Engineering Alumni (OEA) Award recognizes graduates who have reached exceptional levels of professional achievement. It rewards outstanding alumni for their success in their field and for the impact they have had and will continue to have on society and their profession. Established in 1966, the award is the highest honor bestowed by the College.

Faust, along with the College’s other 11 OEA Award recipients, will receive her award at a ceremony on April 23 at the Nittany Lion Inn on the University Park campus.

“When I received the award notification letter, I felt so honored,” said Faust. “I was completely overwhelmed.”

Faust was a pathfinder as the first woman to graduate from Penn State with a bachelor’s degree in engineering science (E SC). What she thought was a ‘problem’ in deciding which major to pursue turned out to be her greatest asset.

“I liked so many different things—that was the problem,” said Faust. “My father had studied industrial engineering at Penn State and thought that engineering would be good for me. I considered studying either chemical or aeronautical engineering, but during my first semester of classes I realized that chemical engineering was not for me.

“At the end of my first year, I accepted the invitation to join the engineering science program. It was the perfect fit because the multidisciplinary nature of the curriculum and the ability to tailor studies to my interests really appealed to me.”

Following graduation, Faust joined General Electric (GE) Aerospace, which later became Martin Marietta and then Lockheed Martin, as an engineer in the highly selective GE Space Technology Engineering Program in the company’s Missile and Space Division. She became the first woman to complete the program, and soon after, earned a master’s degree in engineering mechanics from the University of Pennsylvania. 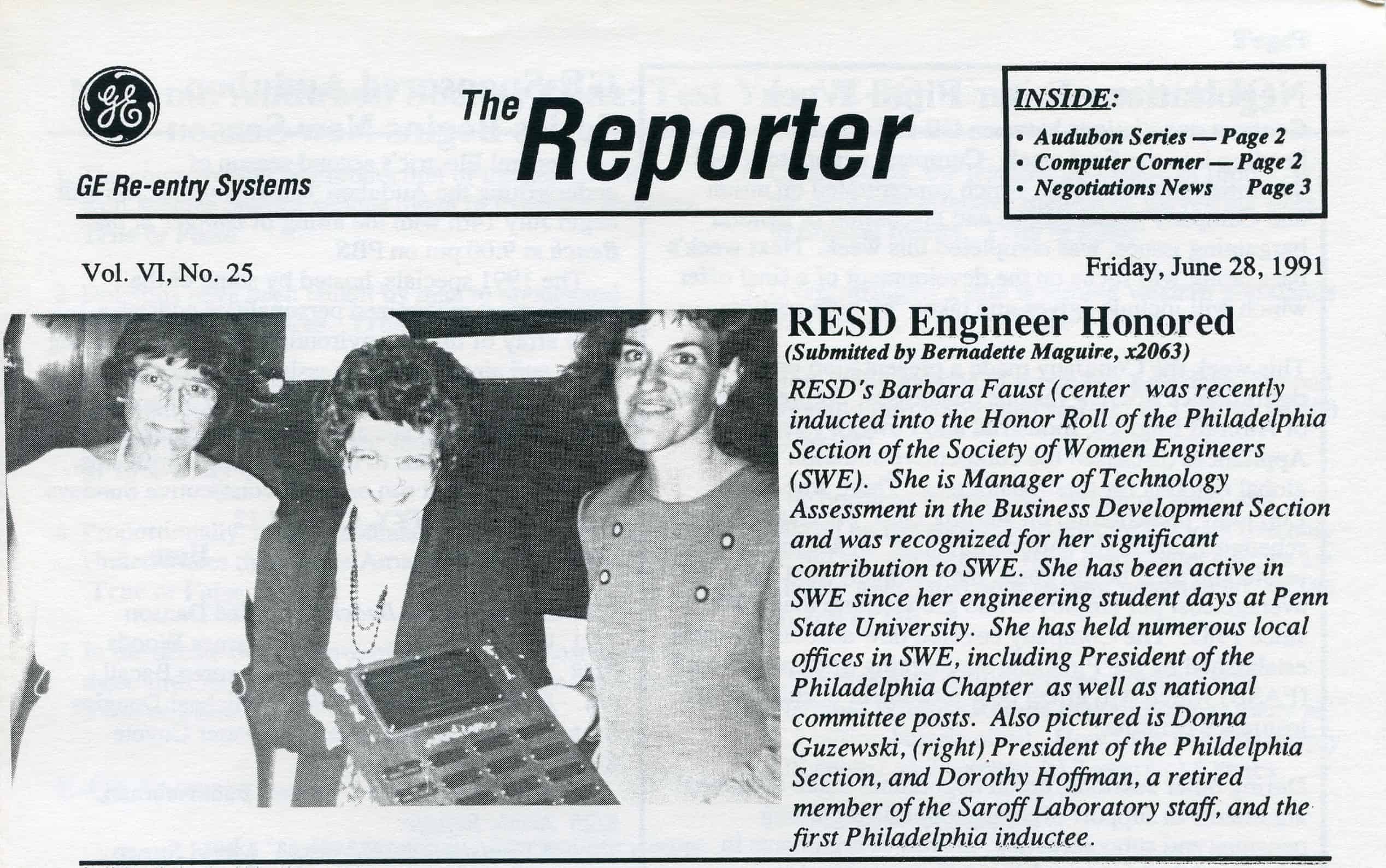 Faust retired in 1998 as manager, technology assessment programs, and then spent several years as a part-time consultant for General Sciences, Inc.

From the time she was an undergraduate student, Faust served as a role model for future generations of engineers through her commitment to industry, outreach and service. She has encouraged countless young women to pursue and succeed in science, technology, engineering and mathematics careers, primarily through her active participation with the Society of Women Engineers (SWE) in its Philadelphia Section.

In addition to serving multiple terms in most positions on the section’s Executive Council, including president, section representative and treasurer, Faust was long-time chair of the section’s Certificate of Merit and science fair award outreach programs, and also served as SWE counselor to the Lehigh and Drexel University Collegiate Sections. Her positions at the regional and national levels included treasurer for a Mid-Atlantic Region Conference and several years as the Society’s new section coordinator. She was named to the Philadelphia Section Hall of Fame in 1991, was elected an SWE Fellow in 1994 and is an SWE Life Member.

She was honored as an ESM Centennial Fellow in 2006 and was a recipient of the PSEAS Distinguished Service Award in 2009.

Faust is active in her local community where she continues to inspire and serve others. She works approximately half-time as a volunteer and board member of the Pennridge FISH Organization that provides food, clothing and financial assistance to low-income households within the Pennridge School District. She also serves on the Perkasie Borough Planning Commission, where she has served several terms as vice chair.

Faust lives in Perkasie, Pennsylvania, with her husband, Jerry, an aerospace engineer from Texas A&M University. She has three step-children, six grandchildren and one great-grandchild.  Additional family members who earned engineering degrees from Penn State include a brother and two nieces, and her granddaughter who holds an engineering degree from the Rochester Institute of Technology.

Read more about Barbara and her family in this 2017 article from SWE Magazine.