The First Woman Engineer in India

Electrical engineering in her blood, A. Lalitha became the first woman engineer of India in 1943 when she graduated from the University of Madras.

Electrical engineering was in her blood:
A. Lalitha, the first woman engineer in India

This article was written by Shantha Mohan, Ph.D., and first published on Mathisarovar.

In 1940, Lalitha didn’t know she was making history. But she did – as the first woman engineer of India, and the first woman to graduate from the oldest Indian technical institution, my Alma mater, College of Engineering, Guindy (CEG), University of Madras.

Lalitha was born on August 27, 1919 in Chennai (then Madras). She had a middle class upbringing in a Telugu speaking family (Chennai is predominantly a Tamil speaking city). She had four older and two younger siblings.  Child marriages were the norm in India in the first quarter of 1900’s, and Lalitha was married in 1934, when she was fifteen. Her studies continued even after marriage, but came to a stop after receiving the Secondary School Leaving Certificate (SSLC or Class X). Her daughter Syamala was born in 1937 and was only four months old when Lalitha’s husband passed away.

As a young widow with a baby, Lalitha wanted to go to college and get a professional degree that would allow her to be self-sufficient.  India was not a friendly place for widows in those days, and actually continues to be so even in the modern times. This must have been in Lalitha’s mind later when she represented India in the Women Engineers’ Society’s Society of Women Engineers’ first international conference in 1964, where she is known to have said “150 years ago, I would have been burned at the funeral pyre with my husband’s body”. 1939 wasn’t quite as bad, and with the support of her family, Lalitha could think about making a life for herself and her daughter.

Women were already making a name for themselves in the field of medicine.  As early as late  1800’s there were a handful of women who graduated with western medical degrees. Lalitha thought about medicine as a career, but the rigors of being a doctor, while taking care of a young child didn’t appeal to her. The other option was to become an engineer, and follow in the footsteps of her father and brothers, but even though Lalitha was a brilliant student and getting into CEG today would have been a breeze, this seemed impossible in an age where technical education was considered a male prerogative. Luckily, her father, Pappu Subba Rao was a professor of electrical engineering, at CEG. He took up her daughter’s cause, and spoke to the then principal of the college, Dr. K.C. Chacko. It appears he also had to get the approval from the British government official Sir R.M. Statham, Director for Public Instruction.

Lalitha entered CEG in 1940 as a student of the four year electrical engineering program. Campus life as a lone woman must have been challenging. Thinking back to my days in the campus in the 1960’s, which was much more progressive, I can see how she might have felt about having to study by herself. None of the camaraderie that the male students would have had in studying together, working on projects, having lunch together etc.. However, being the daughter of a professor would have compensated in some ways. The addition of two more women to CEG in 1940 was quite welcome. Both Leelamma George and Teresa joined CEG to study civil engineering in 1940. All three of them would graduate in 1943, the first batch of women to do so from CEG. Lalitha’s Honors degree in Electrical Engineering was awarded in February of 1944.

The first women graduates of CEG: P.K. Thresia, Leelamma George, and A. Lalitha 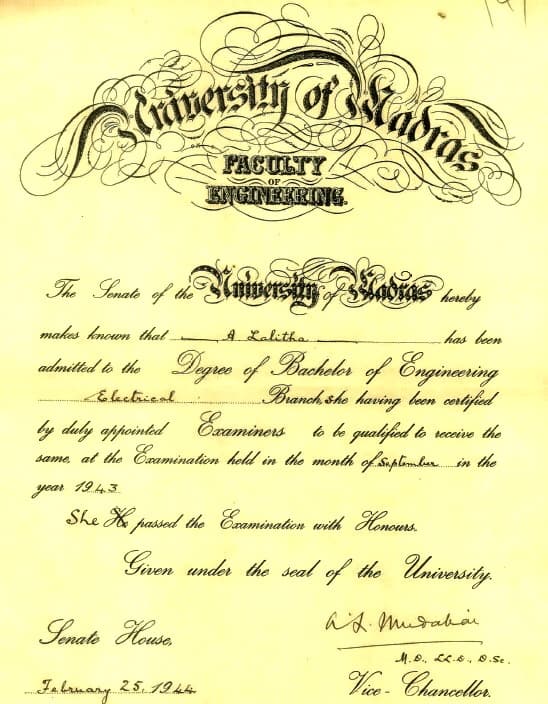 In 1944, Lalitha joined the Central Standards Organization of India, Simla, as an engineering assistant. As a widow with a six year old daughter, she chose this job since she could live with her brother’s family, and have help from her sister in law in raising her daughter. She stayed in the job until December 1946. She also took the Graduateship Exam of the Institution of Electrical Engineers, London, UK.

At the instigation of her father, Lalitha left her job in order to help him with his research. Lalitha’s father had a number of patents, including Jelectromonium (an electrical musical instrument), smokeless ovens and electric flame producer. She couldn’t continue this beyond 1948 due to financial reasons, and joined the Associated Electrical Industries (AEI) . The post was to be in Calcutta, and Lalitha’s second brother lived there, which was fortunate, since living by herself would have been problematic as a widow in those days. In AEI, Lalitha worked in the engineering department, and sales division, Calcutta branch.

She had a very satisfying job there as a design engineer designing transmission lines. Her work also spanned solving problems of protective gear, substation layouts, and execution of contracts. A notable project was the work on electrical generators for the Bhakra Nangal dam, the largest in India. Lalitha’s son in law, also an electrical engineer, knew of her work intimately, and had this to say: “Gradually the designing part was discarded and the activity focused on contract engineering, serving as an intermediary between the equipment manufacturers in England and the local installation and servicing engineers. She continued to work in the same office of AEI, which in later years was taken over by the General Electric Company (GEC) and retired after over thirty odd years.”

As a contracts engineer, AEI engineers were required to visit frequently the installation sites and the offices of the organizations which bought the imported equipment. Being a widow with a child, Lalitha’s work was confined to providing the expertise and assistance to those who were above her in seniority and she did this with great efficiency and satisfaction.

In 1953, the Council of the Institution of Electrical Engineers (IEE), London elected her to be an associate member and in 1966 she became a full member.

One of the highlights of Lalitha’s career was being invited to the First International Conference of Women Engineers and Scientists (ICWES) in New York which took place in June 1964. At that time there was no Indian chapter of the organization, and Lalitha took it upon herself to attend the conference in a private capacity, overcoming many hurdles to do so.

“The Society of Women Engineers (SWE) held the first International Conference of Women Engineers and Scientists (ICWES) June 15-21, 1964, to coincide with the SWE National Convention and the 1964 World’s Fair in New York City, New York. Although ICWES planners originally estimated 300 participants, the conference brought together over 500 people from more than 35 countries to discuss the role of women engineers and the future of engineering.” 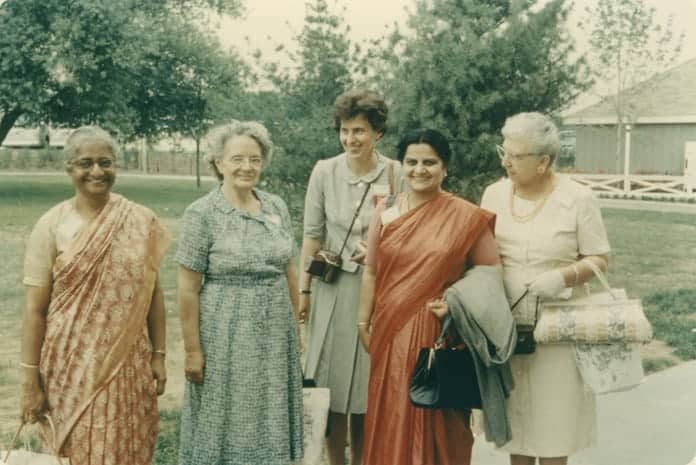 “The conference resolved to encourage women to increase their participation in the professional societies in their countries and improve their qualifications not only during their student days but throughout their professional life. It also resolved to maintain the central file of Women Engineers and Scientists used for this conference and enlarge it as much as possible.”

National and regional newspapers such as Times of India, Indian Electrical News, Dharmayug, Hitavada, and Poona Daily News covered her trip to the conference. 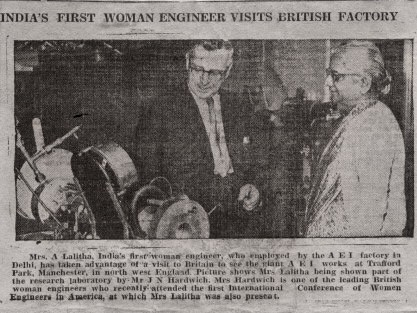 Upon her return, a number of popular women’s magazines in India such as Femina and Eve’s Weekly interviewed Lalitha in which she was able to give voice to her belief that women should be equal participants in the field of engineering.

Lalitha became a full member of the Women’s Engineering Society of London in 1965, and agreed to act as their representative in India for the Second International Conference of Women Engineers & Scientists, held in Cambridge, England in July 1967. She marketed the event in India, and five women engineers from India were able to attend the event.

Engineer, Champion of STEM, Mother, an Inspiration to All Women

Lalitha’s accomplishments when she achieved them are awe inspiring. They would not have been possible without the extensive support structure she had. Her parents encouraged her. Her father went to bat for her in getting her admission to CEG. Her sister brought up Lalitha’s daughter along with her own son so that Lalitha can focus on her studies. Lalitha lived over 35 years with her sister in law in the same house in Calcutta, all part of an extended family, looking after each other’s interests.

Syamala says she never felt the absence of her father because of the strong support she received from her mother. Lalitha encouraged her to study science, and do extracurricular activities such as tennis and swimming. Syamala, who is married to a scientist has degrees in science and education. Her children are scientists as well. It is amazing that at the age of 79, she is still teaching mathematics at a school in the USA.

Lalitha supported the view that widows should remarry, though she herself remained one since she felt committed to her daughter.

She retired from working in 1977. Post retirement found her travelling in the Southern India with her sister. In 1979, when she was only 60 years old, she was struck with a brain aneurysm and passed away after a couple of weeks on October 12.

Lalitha once said “Electrical Engineering runs in my blood. My father, four brothers, nephew and son-in-law are all electrical engineers”. Today, many girls get a STEM (science, technology, engineering and mathematics ) education – both in India, and elsewhere. For any number of reasons many of them decide to drop out of their fields. It takes grit and interest in the field to stay the course and Lalitha’s life is a beacon of light for all the women who came after her in the 1950’s but also today.

I am starting on an ambitious journey of chronicling the life and work of the early CEG women.

My goal is simple – encourage more girls to study engineering & science, enter the work force and be equal partners with men in shaping the future of the world. I am hoping stories of the CEG women will inspire many to do so.

I will be writing more such posts here, and then collect them into a book for publishing.

If you have information about the women who are CEG alumni from the 1940’s to 1960’s please contact me to help make these posts complete.