Three engineering academies in the U.S., U.K., and China are doing their parts to prepare a new generation of engineers to tackle the Grand Challenges for Engineering — 14 goals for sustaining a world of 10 billion people by 2050 with transformative technology and innovative ideas.

The U.S. National Academy of Engineering (NAE), the Royal Academy of Engineering (RAE), and the Chinese Academy of Engineering (CAE) convene the Global Grand Challenges Summit every two years. The 2019 summit, themed “Engineering in an Unpredictable World,” took place in London, Sept. 16–18, drawing nearly 900 engineers, students, educators, entrepreneurs, and policymakers. “This year, about 300 participants were college students,” Randy Atkins, director of communications and media relations for the NAE, said. “Youth brings energy, and I think the older attendees are energized by that. It’s all about preparing the next generation to solve these grand challenges.”

Teams of university students from the U.K., U.S., and China enrolled in the Grand Challenges Scholars Program (GCSP) participated in the summit’s Collaboration Lab, three days packed with cross-cultural icebreakers, team-building sessions, scenario-based facilitated workshops, and mentoring from senior engineers. Teams competed with their ideas for transformative technology, each of which had to address at least one of the Grand Challenges for Engineering, which center on health, sustainability, security, and joy of living, issues set forth by the United Nations as sustainable development goals.

A WIRELESS PATCH FOR PATIENT MONITORING

Emily Cho, currently a junior at the University of Maryland and newly minted SWE member, will graduate in 2021 with a B.S. in mechanical engineering. Cho is one of the first cohorts of the university’s A. James Clark School of Engineering Scholars Program, which produces engineers with multidisciplinary backgrounds that embrace the cultural, business, and accounting aspects of engineering — going beyond the purely technical. “The Grand Challenges Scholars program fit very closely with that overall goal,” she said.

Cho competed with 300 other students in the Collaboration Lab, which took a new twist from previous summits. Following an “in-country” team competition, students were mixed into international teams of six, with two members from each country. Each team had 24 hours to come up with an innovation that would satisfy one of the Global Grand Challenges — and then another 24 hours to develop a business model and four-minute pitch presentation.

Uniquely, Cho’s team included two business majors and one biological sciences major. “Most of the other teams were all engineering or computer science related,” she said. “It blew my mind how all of our different cultures, perspectives, and experiences helped us develop the idea and business model so much more deeply. A few hours in, I felt like these were peers I had worked with for a long time.”

“It blew my mind how all of our different cultures, perspectives, and experiences helped us develop the idea and business model so much more deeply. A few hours in, I felt like these were peers I had worked with for a long time.”

With the clock ticking, the team brainstormed a wearable patch called Postlytics (for “postoperative analytics”), which can transmit vital signs via Wi-Fi to hospitals in real time. “Overcrowding of hospitals is a big issue in China, where services are very centralized,” Cho said. “One of our team members has family in a rural area of China, where it is a very big deal to go to the hospital. So we planned our pilot program there, to not only deal with overcrowding but with limited access to local clinics.”

With a strong focus on recovery and freeing up hospital beds, Postlytics can alert hospital personnel of a patient’s decline, enabling quicker dispatch of emergency services.

The team hopes Postlytics will initially be used for home monitoring of low-risk, post-surgery patients. “Since this is a new and uncharted technology, we plan to start with 4G for data transmission,” Cho said.

After three rounds of judging, Postlytics was selected out of 50 teams as one of four winning pitches invited to present to the summit as a whole. Post-summit, Cho’s team applied for continued support from the RAE. “We’ve continued having weekly meetings, which has been great,” she said. “We’re excited to continue working together.”

During the 16-team, in-country competition, industrial engineering student Rachel Figard and her teammates from North Carolina State University (NCSU) presented a new way of making coffee production more sustainable. “Coffee beans grow inside a berry,” Figard, a junior who will graduate in 2021, explained. “To produce coffee, you have to extract the bean — a process that creates a lot of wastewater, along with other waste products that have a harmful effect on humans — and the health impacts of coffee processing wastewater can range from mild nausea to birth defects. Environmentally, soil loses nutrients from erosion and poor farming practices.”

Silvana Alfieri, an NCSU senior double-majoring in environmental engineering and environmental policy, and the team’s technical lead, explained. “The wastewater has a high density of organic matter and nutrients that can create a toxic, oxygen-depleted environment when released into the environment,” she said. “Our process involves soil amendment with a high capacity to absorb all of those nutrients and organics, resulting in clean water passing through the other side. Additionally, that soil amendment, now loaded with nutrients, can be applied as a fertilizer.”

The team’s startup, Peak Coffee Processing, has applied for a patent for its filtering system, which can be made from locally sourced materials and does not require electricity. “The development of this technology and startup have been an absolutely amazing experience for me, applying technical skills I’ve learned in the classroom to a project with global implications,” Alfieri said.

Figard believes gathering engineers from different backgrounds inspires innovative ideas and broadens understanding. “Whether it’s life experiences, nationality and cultural origins, or just being from underrepresented groups, sharing perspectives leads to better understanding of what the Grand Challenges are and how to address them,” she said.

“Whether it’s life experiences, nationality and cultural origins, or just being from underrepresented groups, sharing perspectives leads to better understanding of what the Grand Challenges are and how to address them.”

Energized by her GCSP experience and the London summit, Figard contacted Atkins at NAE with an idea for expanding participation in the GCSP. She and teammate Pippin Payne are working to create a national students steering committee to deepen networking among students in the program. “This will showcase programs that work and those that aren’t doing as well,” she said. “We’ll be collating those ideas to increase the success of the program.”

GCSP has been implemented at more than 40 engineering schools around the world, with commitments to join from many more. Figard wants to increase that number, beginning with the U.S. “When I entered college, all I knew was that I was good at math and science and that I wanted to change the world. Quite frankly, it’s a daunting task that seemed impossible,” Figard said. “The Grand Challenges Scholars Program helped me find a direction. I’m passionate about expanding it, because it’s also a way of giving back to others what was given to me. I want future philanthropists, entrepreneurs, and all the great engineers in the world to have exposure to this program because, ultimately, it gives you direction for how to go about solving the bigger engineering problems.” 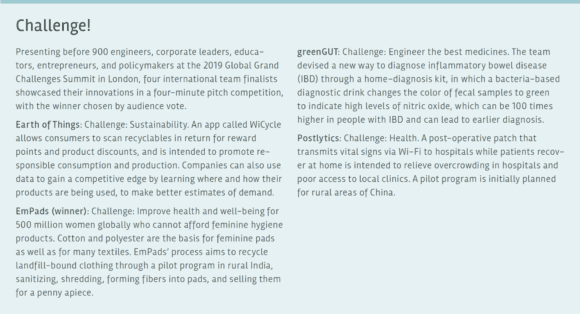 Learn more about the Grand Challenges Scholars Program at: http://www.engineeringchallenges.org/GrandChallengeScholarsProgram.aspx

“Collegians Take on Engineering’s Grand Challenges” was written by Seabright McCabe, SWE Contributor. This article appears in the 2020 Winter issue of SWE Magazine.