Co-chair of SWE’s 1990 National Convention and Student Conference, celebrating the Society’s 40th anniversary; active in the New York Section, she served on the board of directors as Region E director. 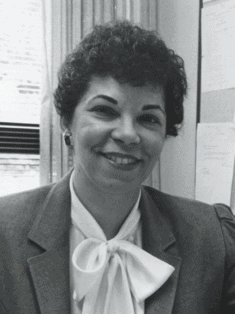 Marta Navia Kindya, a native of Cuba, grew up in New York City and joined SWE in 1964 as a student member — the designation given to collegians at the time. She earned a B.S. in metallurgical engineering in 1969 from the Polytechnic Institute of Brooklyn, now the New York University Tandon School of Engineering. That same year she was married; began her career as a project engineer with the New York Telephone Co., part of the Bell Telephone System; and upgraded her SWE membership.

Kindya spent much of her career in telecommunications, progressing through both engineering and management positions. With the breakup of the Bell System in the mid-1980s, she worked for NYNEX Corp., the parent company of former Bell companies that served five New England States and most of New York. Kindya became staff director–technology administration in the research and development organization at NYNEX, advancing to associate director, corporate planning. Additionally, she received an MBA from Pace University.

Throughout these years, Kindya remained active in the New York Section and on the region and Society levels of SWE. She served as president, vice president, and section representative of the New York Section (similar to a senate position in today’s organizational structure), as well as in various other volunteer capacities. As deputy director for Region E, she supported the director and organizational efforts throughout the region, later becoming the region director — a board of directors-level position at the time. Region E covered Delaware, Eastern Pennsylvania, Maryland, New Jersey, New York, Virginia, and Washington, D.C.

Kindya was the co-chair (with Marianne Musella) of the 1990 National Conference and Student Convention, forerunner of today’s annual conference. Held in New York City, which was home to SWE headquarters, the event also celebrated the Society’s 40th anniversary. At that time, conferences were volunteer driven and executed, requiring enormous time commitments from the membership.

In addition to her responsibilities for conference details, Kindya spearheaded a publication of the Society’s 40-year history. Without the benefit of SWE’s currently robust archives system, Kindya and co-author Sudha Dave, also of the New York Section, embarked on this ambitious project, which encouraged later accounts of the Society’s history.

She wrapped up her career as a principal analyst in research at Gartner Dataquest, where, among other projects, she researched the digital divide in Latin America in the early 2000s. Kindya retired from Gartner Dataquest in May 2004.

“In Memoriam: Marta Kindya 1946-2019” was written by Anne M. Perusek, SWE Director of Editorial and Publications. This article appears in the 2020 spring issue of SWE Magazine.