Participants in SWE’s 2020 congressional “Diversity and Inclusion Fuels Innovation in STEM” outreach conveyed the Society’s message to legislators despite the challenges brought by COVID-19.

Shortly past noon on Wednesday, March 11, just as the training portion of SWE’s 2020 congressional outreach effort was about to begin, the global coronavirus outbreak was introducing a “new normal” of closed schools, social distancing, and remote work.

The World Health Organization officially announced that the rapidly spreading virus, and the potentially deadly COVID-19 respiratory disease it caused, had become a global pandemic. Word passed quickly from table to table at the Willard Intercontinental Hotel, where more than 100 women engineers sat grouped together by home state. Everyone wondered what would come next.

Initially, the March 11–12, 2020 outreach event had been on track to be the largest ever. More than 175 SWE members registered, according to Della Cronin, SWE’s Washington representative and a political consultant who supports the annual event. As the date approached and concern about exposure to the coronavirus grew, however, members canceled, leaving the final count at slightly more than 100.

Many attendees feared their companies would immediately recall them. Perhaps because participants were scheduled to return home the following day, after meeting with their representatives, only one company made such a request.

Still, the ground had shifted, and aftershocks followed. By the close of the event, the stock market lost nearly 5% of its value; public school systems across the country announced massive closures; universities extended their spring breaks by several weeks; and, shortly after, much of the sports world, including Major League Baseball, the NBA, the WNBA, and the NCAA, to name a few, halted their seasons or canceled major tournaments.

By the next morning, Congress would begin implementing its own quarantine protocols, putting many of the scheduled face-to-face meetings in doubt. Cronin said attendees responded like engineers and immediately switched into problem-solving mode. Those who needed to make alternate arrangements held their meetings remotely.

Meanwhile, despite the turmoil, the 2020 congressional outreach meetings moved ahead, following the playbook that SWE had perfected over the prior 15 years. Attendees, half of whom were first-time participants, spent day one taking a crash course on everything from SWE policy priorities to how to be an effective advocate to Congress.

Training included updates on the current status of SWE’s legislative agenda. Cronin reviewed the state of key appropriations, new developments in Title IX legislation, and the latest developments in such issues as STEM for girls and minorities in grades K–16.

Two Capitol Hill staffers gave an insider’s view of Congress — including the surprisingly broad, bipartisan nature of support for SWE’s agenda. Kelly Riddle, legislative assistant to Sen. Jacky Rosen, D-Nev., was joined by Catherine Johnson, a staffer for Rep. Frank Dean Lucas, R-Okla., ranking member of the House Committee on Science, Space, and Technology. Both stressed their bosses’ general support for SWE causes and actions they had taken to advance them. Congress, they said, puts a premium on input from members of nonpartisan, professional groups like SWE, and they encouraged attendees to freely share their personal experiences and insights on sexual bias in the STEM workplace, and more. 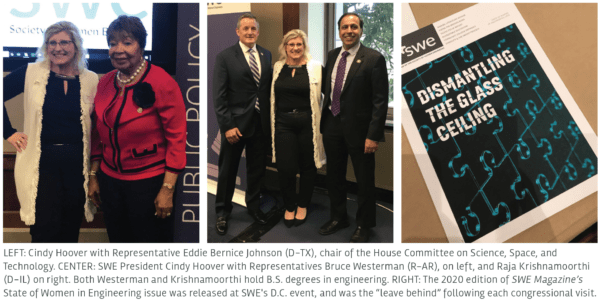 Roberta Rincon, Ph.D., SWE senior manager of research, reviewed facts that support SWE’s priority positions on a broad range of subjects. She also highlighted the contents of the current special edition of SWE Magazine, the State of Women in Engineering. Members typically use the magazine as a valued leave-behind at the end of their outreach meetings.

Day two was reserved strictly for congressional visits. Reflecting heightened concerns and growing awareness of the importance of social distancing, some visits were switched to phone calls. Despite that, SWE members adapted as needed, and were able to effectively convey their message to their legislators or legislative staffers.

Karen Horting, CAE, SWE executive director and CEO, said that the 2020 outreach event showed SWE’s influence and credibility have grown. “There was genuine interest in hearing what we thought and what our position was,” she said.

Attendees Horting spoke with said the outreach effort had been a positive experience. “They were thrilled to be a part of the process. They thought the training had been great. And they felt the conversations they had with their legislators or their staff had been highly productive.”

Horting said one member from North Dakota had been particularly pleased with the outcome of her meeting. “She had been running a STEM outreach program for girls for years and was struggling to maintain attendance levels. The House member’s staff she met with told her, ‘We can help you with that!’ And she was just thrilled.” “Would that have happened for her without SWE?” Horting wondered aloud. “Probably not.”

“Visiting Congress During a Global Health Crisis” was written by Jon Reisfeld, SWE Contributor. This article appears in the 2020 spring issue of SWE Magazine.