Skip to content
SWE's Ongoing Work for Intentional Inclusion >
WE20 Has Gone Completely Virtual >
TRENDING
Learn How to Impact STEM-Related Policy at the National Level 6 days ago
Doing Her Part to Redefine the Field of Engineering 7 days ago
4 Easy Ways to Engage Girls in Engineering on Girl Day, 2021 6 days ago
Podcast: Louvere Walker-Hannon on Getting More Black Women Involved in STEM 5 days ago
Let Your Intuition Complement the Rational Mind 15 hours ago
Next
Prev
Facebook-f
Twitter
Linkedin-in
Youtube
Soundcloud
Instagram
Flickr 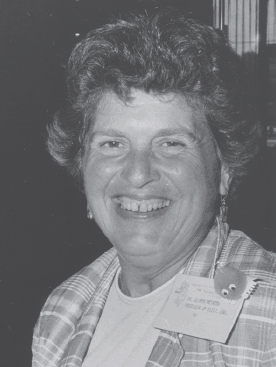 Gloria Brooks Reinish, Sc.D., F.SWE, died Jan. 29, 2019. The first woman to receive an engineering degree from Columbia University, Dr. Reinish was a trailblazer and leader. In addition to her technical and academic accomplishments, she was known for her commitment to women in engineering and service to SWE.

Dr. Reinish grew up in Brooklyn with a love for math. In an oral history interview, she described how this led her to apply to the engineering program at the tuition-free Cooper Union for the Advancement of Science and Art. Dissatisfied with some policy decisions there, in 1943 she applied to Columbia University, receiving a scholarship. She was in the first class to allow women and graduated in 1945 with her B.S. in electrical engineering, ranking second in her graduating class.

Her first job was with Bell Labs. She initially turned down the offer when the title was not equivalent to male colleagues — she would have been an assistant. Bell Labs conceded, and Dr. Reinish began her career in industry working on radar systems as a member of the technical staff. She moved on to Sperry Gyroscope, which led to her patent on a radar ranging system. She also began taking classes at Columbia, working toward a master’s in electrical engineering, which she completed in 1948 while working full time. Soon after, she married Martin Reinish, a fellow engineer.

With a growing family, Dr. Reinish left the inflexibility of industry and became a part-time instructor at Fairleigh Dickinson University in 1961, where she discovered a love of teaching. While continuing to teach, she returned to Columbia, where she worked on her doctorate at the same time her daughter Nancy was there as an engineering undergrad. Earning her doctorate in bioengineering in 1974, Dr. Reinish’s thesis investigated how electricity could stimulate bone growth in humans in response to stress. Her expertise led to consulting with the Food and Drug Administration.

Dr. Reinish remained at Fairleigh Dickinson until her death. She became a full professor, first woman chair of the electrical engineering department, founding chair of the bioengineering department, and pioneered online learning. She also founded the SWE collegiate section, conducted outreach to area high schools, and was active in the New Jersey Section. Dr. Reinish was named a SWE Fellow in 2001.

She was also a member of Tau Beta Phi, an IEEE life member, and was recognized by Columbia University during its 150th anniversary celebration in 2014.

Dr. Reinish is survived by her children: Nancy Passow, Julie Askins, and Jim Reinish — all engineers — and seven grandchildren. She was predeceased by her husband of 70 years, Martin, and a granddaughter.