After a successful start, the Ad Council’s new STEM diversity campaign is expanding its content, reach, and appeal.

Michelle Hillman, chief campaign development officer for the Ad Council, made a surprising discovery last year about 11- to 14-year-old girls: They have a voracious appetite for digital content.

“Girls in this age range just gobble up content so quickly,” Hillman said. Indeed, the tween girls’ endless interest in fresh, new material initially caught Hillman and her small Ad Council team off guard. They often had to scramble to develop or source enough new content for the #SheCanSTEM campaign’s Instagram page to, as Hillman put it, “keep the conversation going and keep the girls engaged and excited.”

It appears they succeeded. Already, #SheCanSTEM enjoys a solid presence on Instagram. Its home page has attracted nearly 15,000 followers, and its hashtag — #SheCanSTEM — has been used in more than 5,000 social media posts.
Meanwhile, Hillman’s team spent the past year perfecting a multipronged growth strategy that she hopes to soon implement on a broader scale to dramatically increase the campaign’s reach, content, and relevance.

“The program is exceeding our expectations,” Hillman said. “We’re proud of the work we’ve done over the last 12 months.”

Ultimately, the Ad Council would like #SheCanSTEM to be able to deliver on the promise contained in the phrase, “If she can see it, she can be it,” but to do so, the Ad Council must first amass a large, diverse collection of female STEM role models.

“We want every girl who comes to She Can STEM to see someone who looks like her, whom she can relate to, doing something that she’s interested in and that she could see herself doing,” Hillman explained. “To do that, you really have to scale [up]. You need to have examples of as many women as you can, across as many diverse groups as you can, across as many diverse professions as you can. And you need to be able to balance the frequency at which you can talk to all of them.”

“WE WANT EVERY GIRL WHO COMES TO SHE CAN STEM TO SEE SOMEONE WHO LOOKS LIKE HER, WHOM SHE CAN RELATE TO, DOING SOMETHING THAT SHE’S INTERESTED IN AND THAT SHE COULD SEE HERSELF DOING.”

So far, with help from both its corporate and nonprofit partners, the Ad Council has compiled what Hillman calls “a robust library” of video interviews with more than 50 female STEM role models. The women come from diverse backgrounds and diverse STEM fields — “everything from coding to conservation and aerospace to acoustical engineering. We’re really trying to show all the unexpected sides of STEM,” she said.

But achieving the depth and diversity required to have the broadest-possible appeal could take considerable time and resources, and Hillman’s team already is stretched thin. At any given time, she noted, the Ad Council can be managing from 35 to 40 separate public service campaigns.

“Our greatest challenge,” Hillman said, “is just being able to keep up with the scale of what we want this program to be, because we’re a nonprofit. Budgets are not endless and limitless, and even though we have wonderful partners at the table, you could talk to these girls all day, every day, about this issue.”

Hillman says she expects the program will take years to fulfill its potential. “When you’re building a brand like this and working on this kind of campaign, it’s really a marathon, not a sprint,” she explained. “But we’re feeling good about where we are.”

For the Ad Council, which has a 75-year history steeped in the use of traditional print and broadcast media, reaching the #SheCanSTEM target audience of 11- to 14-year-old girls has required a considerable media-strategy rethink.

“These girls are online,”Hillman explained. “We’re constantly looking at online media directed at tweens.” Once they find the right content, Hillman’s team asks the creator/influencers who run the sites and star in the content to either donate free advertising space, personally endorse and promote the #SheCanSTEM campaign, or both. So far, the campaign has focused almost exclusively on the Instagram, YouTube, and Snapchat platforms, where tween girls tend to congregate and where they are often extremely loyal followers and fans.

Kloss, who is the host and executive producer of “Project Runway” on Bravo, is an avid computer coder. She developed a 60-second video spot to jointly promote #SheCanSTEM and Kode With Klossy, her nonprofit, two-week, free summer coding camp for girls. The slick, stylized video featured actual Kode with Klossy camp graduates and was a big hit. Kloss posted it to the #SheCanSTEM site last March, and the video has had nearly 2 million views. It also generated 682 comments. “It was fantastic,” Hillman said. “It got the most engagement of any piece of content we’ve put out so far.” 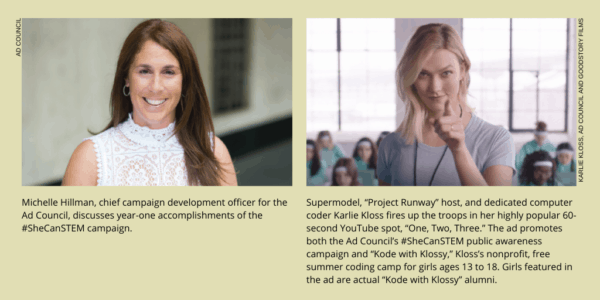 Kloss has proved to be a great partner. “She’s the brand that’s at the sweet spot of pop culture and what girls care about,” Hillman explained.

The STEM series starred Holland Roden, a well-known MTV influencer and celebrity. “She interviewed girls and really cool women in STEM,” Hillman said, “and we saw a lot of engagement around that as well.”

Leveraging voices — whether visual artists, musicians, thought leaders, or others — who are already major presences on the social media platforms frequented by tween girls will remain a core element of the Ad Council’s marketing strategy. In fact, the council already has plans to significantly ratchet up its involvement with these groups.

In October, it hosted an influencer/creator summit, in Los Angeles, for 15 to 20 influencers who expressed interest in helping promote #SheCanSTEM. The Ad Council discussed the campaign, the importance of having girls engage with STEM, and the benefit of creating content that has “a universal look and feel around #SheCanSTEM.” The goal is to make the influencers’ contributions more polished and more consistent — which also should improve their overall effectiveness.

Hillman is excited about the potential for expanding and strengthening these online influencer connections. “Creator content is just ‘cake’ with tween girls,” she said. “Interviews are great, but when you have someone like Karlie Kloss or Karina Garcia just speaking about your message — and the girls are showing up to watch these people every day — the credibility that comes with that is just unparalleled as you’re trying to build a new brand.”

The Ad Council’s media strategy is having an impact. Early surveys show growing awareness of the #SheCanSTEM campaign among tween girls. Slightly fewer than half (44%) of girls surveyed said they had seen at least one of the #SheCanSTEM public service ads. And three-quarters of all girls said they had participated in at least one STEM activity outside of school during the year — that’s about a one-in-seven increase compared with a year earlier.

While Hillman says the Ad Council doesn’t take full credit for that activity, it does show progress. “People are starting to see our advertising,” she said. “They’re starting to join the platform.”

The concept of building strategic relationships with influencers and outside organizations and then leveraging them to benefit the overall campaign is a growth strategy with enormous potential. It’s also one deeply ingrained in the broad-based coalition of partners that underlies the entire #SheCanSTEM effort.

The campaign has increased the number of strategic partners in its coalition from its launch back in September 2018. Of the original corporate funding partners, all five sat on the Ad Council’s board of directors. Those companies — global tech giants GE, Google, IBM, Microsoft, and Verizon — employed large STEM workforces, and all supported their own ongoing STEM diversity projects designed to draw more women into those fields. They were joined in January 2019 by Bloomberg L.P. — also an Ad Council board member. Immediately after the Ad Council began airing its #SheCanSTEM spots, Bloomberg reached out and offered to sign on as the campaign’s sixth, and final, funding partner.

Deirdre Bigley, Bloomberg’s chief marketing officer, said joining the #SheCanSTEM campaign was a natural outgrowth of the communication giant’s commitment to drawing young women to STEM careers and to increasing what she calls “the meaningful participation of women in computing.” Bloomberg’s participation, she added, amplifies its voice and extends its reach in promoting greater STEM diversity.

Eight nonprofit organizations with a vested interest in advancing the cause of STEM for girls make up the rest of the #SheCanSTEM coalition. In addition to SWE, these groups include Black Girls Code, ChickTech, Girls Inc., Girl Scouts of the USA, Girls Who Code, the National Center for Women and Information Technology, and the New York Academy of Sciences. They were joined in January 2019 by an enthusiastic new member: the Dallas, Texas-based Lyda Hill Philanthropies.

Shortly after #SheCanSTEM launched, the Ad Council received an excited phone call from the Lyda Hill Philanthropies, which had been independently developing a remarkably similar STEM diversity campaign of its own, called IF/THEN®.

Hillman vividly recalled the conversation: “They said, ‘This is amazing. You’ve actually done what we want to be doing. We’re also working with media partners and brands and nonprofits, and it would be great if we could pool our resources and work together. Tell us more!’”

The two groups soon joined forces and Hillman says they’ve been working together in “a really nice collaboration” ever since.

Both projects complement each other in remarkable ways. While #SheCanSTEM has focused on traditional advertising and online marketing channels, the Lyda Hill effort has concentrated on developing national outreach channels through the American Association for the Advancement of Science (AAAS), and with major museums located across the country. It also has sponsored two new STEM videoshows: “Mission Unstoppable,” a half-hour series on the CBS televison network, and “Fast Forward Girls,” a weekly YouTube series.

Lyda Hill leads the Ad Council in identifying female STEM role models. It has conducted a nationwide search to select 125 women STEM role models who have agreed to serve as AAAS IF/THEN ambassadors who will make in-person and media appearances to promote STEM for girls. In October, all 125 ambassadors attended a conference at Lyda Hill Philanthropies in Dallas, where they received formal media training, and Hillman’s Ad Council team was invited.
In preparation for the event, Hillman said, “We’re going to go there, and we’re going to capture as many of their stories as we can for #SheCanSTEM.”